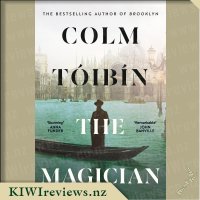 Disclosure StatementFULL DISCLOSURE: A number of units of this product have, at some time, been supplied to KIWIreviews by Macmillan Publishers Ltd or their agents for the purposes of unbiased, independent reviews. No fee was accepted by KIWIreviews or the reviewers themselves - these are genuine, unpaid consumer reviews.
Available:
September 2021

When the Great War breaks out in 1914, Thomas Mann, like so many of his fellow countrymen, is fired up with patriotism. He imagines that the Germany of great literature and music, which had drawn him away from the stifling, conservative town of his childhood, might be a source of pride once again. But his flawed vision will form the beginning of a dark and complex relationship with his homeland, and see the start of great conflict within his own brilliant and troubled family.

Although Mann becomes famous and admired, his inner life is hesitant, fearful and secretive. His blindness to impending disaster in the Great War will force him to rethink his relationship with Germany as Hitler comes to power. He and his wife Katia deal with exile bravely, doing everything possible to keep their family safe, yet they also suffer the terrible ravages of suicide among Thomas' siblings, and their own children.

Thomas Mann is one of the best known German authors; his work continues to be read and enjoyed, both in the original German and in translation, all over the world. His ongoing fame was assured when he was awarded the Nobel Prize for Literature in 1929. As a teenager, I read most of his works - I was fascinated by the Europe that he depicted, a way of life both familiar and foreign. The book which completely captivated me, and the one I read first, was Der Zauberberg (the Magic Mountain) - Mann's preoccupation with detail (both pleasant and gruesome), the physical disintegration of the human body in a person who is terminally ill, and the microcosm of social life at this period within the walls of a sanitorium, ensured that I was intrigued from start to finish. And it is not a short read! With this background, I was eager to read Toibin's novel to see if his reactions were similar to mine. Novel it may be, but The Magician is based on fact - with a few liberties taken here and there, just enough to maintain reader interest.

Toibin's writing style shares similarities with that of Mann in its depth, but it seems to me that it is far more accessible to the modern reader. This may be because a century separates the two; language has changed over time so Mann's work could be seen as old-fashioned. Toibin is also writing in English whereas Mann's work was in German - and as Toibin wryly remarks at one stage, some of the translations into English were not particularly effective! Either way, I found Toibin's text easy to read and, despite the sometimes sombre events he was describing, highly entertaining.

The journeys Thomas Mann and his various family members undertook gave Toibin the opportunity to set them against the background of what was happening in the world at the time. The narrative starts in Europe before the Great War, and continues through the years of depression and on to World War 2. Being an artist above all else, Mann tried to stay out of politics despite his hatred of Hitler and all his party stood for, but to little avail. His wife Katia was Jewish; his two oldest children were both overtly political, leading a hedonistic lifestyle which was bound to attract attention. In the 1930s, Germany, and indeed most of Europe, was becoming far too dangerous for the Mann family. Toibin traces their journey to the USA, highlighting the way Mann tried to minimise their reasons for leaving Europe but without success. Constant reminders, and finally the challenge to him when he learned about the Nazi death camps back at home, ensured that he could never again plead ignorance. His own fame and literary success always demanded that he took sides - either for Hitler and all he stood for, or against him.

I loved the way that Toibin skilfully interwove elements of Mann's private life into the storylines of his major works. Despite being married and having six children with his wife Katia, Mann was homosexual and had dalliances with several young men, the first when he was still at school. At least two of his books were directly inspired by these young men, a connection which Toibin emphasised as an essential link between his private and his creative life. Similarly, Mann's reluctance to be seen to be political or to alienate his German publishers by speaking out against the Nazi regime are beautifully portrayed in his interaction with President Roosevelt.

It took me several hours to read this book, and I am a fast reader. But I could not put it down - and cannot wait to read it a second time. The prose is accessible, there is plenty of scandal, the storyline is compulsive, and the allegorical references are so striking that it is sometimes hard not to think that Mann lived and wrote long before COVID-19 was topical. Toibin has done a superlative job in superimposing his own impressions of Thomas Mann on the real writer.

When unworldly student Ana Steele first encountered the driven, damaged young entrepreneur Christian Grey, it sparked a sensual affair that changed both their lives irrevocably. Now, finally together, they have love, passion, intimacy, wealth, and a world of infinite possibilities. But Ana always ... more...