« Ghosts of the Past review 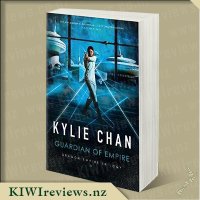 Disclosure StatementFULL DISCLOSURE: A number of units of this product have, at some time, been supplied to KIWIreviews by HarperCollins or their agents for the purposes of unbiased, independent reviews. No fee was accepted by KIWIreviews or the reviewers themselves - these are genuine, unpaid consumer reviews.
Available:
May 2019

Earth has joined the Galactic Empire, a vast interstellar society ruled by dragon-like aliens where everybody is immortal. Pain, famine and disease have been eradicated, but this doesn't mean the end of conflict. A cruel alien Republic has been watching from afar and wants to take the Empire's progress for its own.

Jian Choumali, ex-British forces and now Colonel in the Imperial space force, must fight to keep her friends, family and fellow citizens in the Empire safe. A brutal battle of skill and wits begins as Jian and her human colleagues attempt to combat the invaders - but with all their technology, enhancements and weapons in the hands of their enemies, the odds are stacked against them, and there is the very real threat of the destruction of the Empire itself.

After getting utterly hooked on the first book in the series I was excited to see this arrive. I was expecting it to continue along the same lines, and it did to a degree. It didn't go at all where I thought it would, and at first I felt disappointed, however the more I read, the less it bothered me and the more it gripped me with a fresh, new joy.

While the first book was very Earth-centric, this volume took us to the Cat homeworld for a significant chunk of the plot, and gave more focus to Oliver - the Cat orphan adopted by Jian - and his place in the bigger picture. It also developed the Cat Republic's backstory, origins and ongoing lifestyle. This gave the overall plot a nice refresh, but also expanded the scope of this story's universe exponentially. Characters that at first seemed to be little more than bit-players were revealed to be far more important to the ongoing development of the Dragon Empire, and Humanity's place as 'influencers at the highest level'. While this is a trope often abused, to the point that it's made irrelevant by its common use, in this instance, it was played delicately, almost subtly, and that made it far easier to accept without issue.

The technological differences between the Dragon Empire - effectively "managed" by the AI 'Marque' - and that developed by the Cat Republic (which, it turns out, is closer to a co-operative collection of individual kingdoms, not all that dissimilar to the Chinese military) is highlighted in a very sudden and stunning way. It's one of those 'hidden in plain sight' things that only reveals itself at the climax of the tension curve. We are also made aware that while these aliens look like giant cats - similar to the Kzinti from Larry Niven's "Known Space" (aka Ringworld) universe - they do not have the same playful nature even in their down-time. In fact, I was struck by the strong similarities between these two felinesque species - aggressive, territorial impulses, strong intellects turned towards domination and dominion, co-operation only when necessary, and betrayal as an accepted part of the societal norms.

Overall, I thought this a great second-in-a-trilogy, which is no surprise to me because Kylie has proven her ability, time and time again, to cleanly utilise the accepted format for trilogies: Book 1 is introduction of key characters and scene-setting, Book 2 is plot/world/character development and tension-building, and Book 3 is culmination, climax and cleanup. Kylie's tales have never failed to please me, and I admit freely that I am a very picky reader of sci-fi. If the balance is off, or the depth and detail isn't there by the end of Book 1, I'm unlikely to bother reading beyond there. I am excited to see where Book 3 goes, because the one thing I am realising in this series - Kylie's not playing entirely by the rules, and it's working!