The Nightmare Before Christmas review 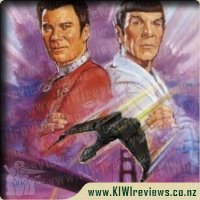 In a frantic attempt to save mankind, Kirk and his crew must travel back to 1986 San Francisco where they find a world of punk, pizza and exact-change buses that are as alien as anything they've ever encountered in the far reaches of the galaxy. A thrilling, action-packed mission for the Starship Enterprise!

"They like you very much, but they are not the hell "your" whales." Following on directly from the events in Star Trek 3, the crew of the Enterprise are on route to Earth, in a Klingon ship, when they get a distress call from Starfleet, Earth is under attack. The only solution? They must travel back into the past and somehow find two humpback whales and return with them to the future.

This has always been a firm favourite of mine out of all the eleven movies that I have seen so far, in fact I would say it is at the top of my list. There isn't a whole lot of action in this film, but what it lacks in action it more than makes up for in humour at the crew of the Enterprise trying to blend in and 'act normal'.

The infamous story of Benjamin Barker, a.k.a Sweeney Todd, who sets up a barber shop down in London which is the basis for a sinister partnership with his fellow tenant, Mrs. Lovett. Based on the hit Broadway musical.