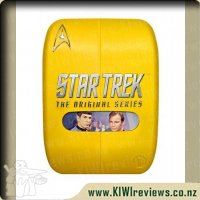 Star Trek The Original Series Season 1 features the adventures of the U.S.S. Enterprise under the command of Capt. James Kirk (Shatner) and his first officer, Lt. Cmdr Spock (Nimoy) during the 23rd century. They are on a mission in outer space to explore new worlds, where the Enterprise encounters Klingons, Romulans, time paradoxes, tribbles and genetic supermen.

It's been nearly fifty years since Star Trek the Original Series first hit our TV screens and it's a show that has managed to reboot twice spawning a total of six different TV series and thirteen movies with more to come.

Here we meet Captain James TIberius Kirk and the crew of the U.S.S. Enterprise. The first season had a long run and introduced us to some classic aliens such as Klingons and immortal characters like Kahn!!!!!!!!! Though the special effects are dated and the dialogue is very cheesy at times it's still a classic. The first season also gives us the 'Red Shirt, not in command' curse, which for those of you not in the know, it means in a new situation if you are wearing a red shirt, and not in command, you would be the first to die.

Even if you aren't too interested in science fiction or Star Trek, it is still fun to watch the series simply for the historical significance, a black woman on the bridge and part of the command crew and so on. The stories still hold their own today and the banter between Bones and Spock is fun as the relationship has just started and they are both learning about each other.

The first season isn't perfect but it still does a good job of entertaining me, even 48 years later.

Score: 9.3
Product reviews for listing 3305: Doctor Who - The Doctor, The Widow And The Wardrobe -  Type of Show: Science Fiction Series