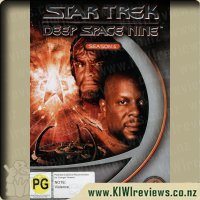 While I wouldn't go so far as to call season 4 the best of Deep Space 9, it is in the running. With season four the series is going down a steadily darkening path, but their are episodes to relieve the tension.

Worf joins the crew and so we now get episodes involving the Klingons. In "The Way of the Warrior" the Federation/Klingon alliance splinters, which adds stress to the show. "Hippocratic Oath" deals with an unusual casualty of war, the slaves who are forced to fight sue to a drug addiction. Bashir tries to cure the Jem'Hadar of their addiction to "the white" despite his misgivings about it. "The Visitor" is one of my favourite episodes of Deep Space 9 with Sisko unstuck in time and the one link to each time he pops up in being his son Jake.

We learn more about one of our baddies, Dukat, when we discover that he has a half Bajoran daughter. And then we have a fun episode, and whilst a little strange at first, it's is far better on its second viewing. Star Trek is no stranger to time travel and our own past and "Little Green Men" has Quark and friends crashing on Earth in the past, giving us Roswell. There is enough of a mix up between overall vibes in the episodes to make this a good season, and it's only going to get darker.

There's some really great acting and yet another great addition to the Star Trek series.

The LazyTown friends are back, in all new adventures featuring Stephanie, Sportacus, and the rest of the LazyTown gang. SuperHeroes Sportacus and Stephanie join forces to help the LazyTowners foil Robbie Rottens latest lazy schemes, in more high-tech and SportsCandy-fueled fashion than ever before. Young SuperHeroes around the world are already lining up in front of their televisions to be amazed and inspired by the most fun and energy-filled ... more...