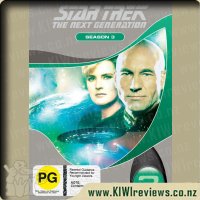 It's Star Trek, but not as we know it! STAR TREK THE NEXT GENERATION on DVD and with completely NEW packaging.

The third season of Star Trek the Next Generation takes us on whole new adventures meeting old and new foes alike.

The crew now works together really well, everyone feels like a family now that we are into our third year together. We also welcome back Gates McFadden as Dr Beverley Crusher, and I must say that I was very glad to have her back, much preferred her as the ships doctor. We also have some returning characters from not only the previous season but from the Original Series, giving us Sarek (Spock's father), Q the mischief maker of the universe and Tasha Yar...

As with any TV series there are always one or two seasons per season that stand out. For me they would have to be "The Offspring" in which Data creates a child, very touching and moving to see Data continue to grow and get some idea of what being human can entail. Then there is of course "The Best of Both Worlds" in which we meet the Borg again, get greeted with the cliffhanger of Picard having been assimilated and the battle of Wolf 359 beginning (which sets the scene for DS9).

The new 3D CGI animated TV series is an inspiring and playful re-imagining of Beatrix Potter's timeless children's classic. Join our hero Peter and his friends Benjamin and Lily as they encounter real dangers, overcome obstacles and outsmart predators, all while finding fun and excitement in the most unexpected places.

Follow Peter as he solves the mystery of the radish robber; brings home Mr. McGregor's cat by mistake; tries to rescue Lily from Mr. Tod's trap, and lots of other daring adventures.