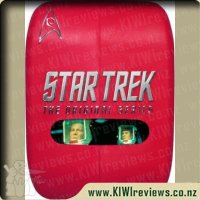 Star Trek The Original Series Season 3 features the adventures of the U.S.S. Enterprise under the command of Capt. James Kirk (Shatner) and his first officer, Lt. Cmdr Spock (Nimoy) during the 23rd century. They are on a mission in outer space to explore new worlds, where the Enterprise encounters Klingons, Romulans, time paradoxes, tribbles and genetic supermen.

Here we return for the final season of the Star Trek Original Series TV show.

Star Trek is a TV show that really pushed the boundaries, especially when it came to things not usually seen or tolerated. One of the defining moments of Star Trek is when Uhura and Kirk kiss, if I am correct it was the first interracial kiss aired on TV, which of course would have gotten a huge reaction, but look where Star Trek is today, still standing. Even Star Trek couldn't stay away from Abraham Lincoln, having him help them teach a creature about good vs. evil.

The special effects were good for the time, and still look good when enhanced for DVD. The acting is corny and downright hilarious at times, though half of that was the script writing. My favourite parts are the banter between Spock and McCoy, I always looked forward to those parts, but my personal favourite parts is when McCoy says "I'm a doctor not a ....", it's one of the longest running in-jokes for the series being brought up again in First Contact and Voyager.

No matter where you joined in the Star Trek adventure, it is worth watching this, just so you can see what a great show it was right at the start.

A collection of 26 classic adventures. Including such favourites as: 'The World's Strangest Engine', 'Thomas, Percy And The Squeak', 'Rusty Saves The Day', and 'Toby Had A Little Lamb'.