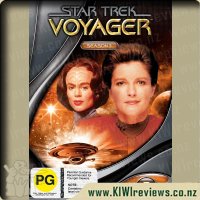 Star Trek: Voyager's fifth season continues the adventures of the Voyager crew led by Captain Janeway. Throughout the season, the Voyager crew plunges into a vast, empty, star-less expanse, makes a surprising discovery in a most unexpected place, has a chance encounter with the remains of a destroyed Borg vessel that results in an unusual effect on Seven of Nine, and suddenly discovers a wormhole that apparently leads to Earth.

And we're back for more star trekking across the universe! (bonus points if you started singing

The crew of Voyager deal with some big problems this season as well as some very personal issues. In one episode B'Elanna becomes self destructive after getting some devastating news from the Alpha Quadrant. Naomi has to deal with her missing mum, Tom Paris is demoted, the uncover what looks to be a plot to take over the Federation, and the Doctor has a big episode when he finds out he's missing some of his memories, very moving and goes to show how much he has grown.

"Relativity" is my favourite episode which sees Seven of Nine being recruited by Braxton (who runs a ship full of people designed to stop time meddling) to save Voyager from being blown up. After several repeat trips she is forced to recruit Captain Janeway and together they set out to save the ship. My least favourite is the final episode, which was also naturally a cliffhanger, in which they come across another Federation ship that is under constant attack from an alien species. My main reason for disliking this episode is how Janeway acts in it, but when you like a character so much you aren't usually going to like it when they suddenly go off the rails.

Another great season, fully looking forward to the next.

Score: 10.0
Product reviews for listing 7761: Blaze and The Monster Machines: Race in to Velocityville -  Type of Show: Animated Series

Blaze And The Monster Machines: Race Into Velocityville

Collection of animated adventures featuring monster truck Blaze (voice of Nolan North) and his eight-year-old driver AJ (Dusan Brown) as they take on a series of problems using science and maths. In these episodes the duo enter a race to the top of Eagle Rock, while also setting ... more...