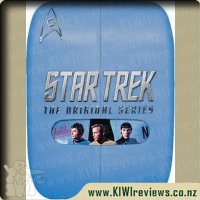 Going boldly where no man had gone before, Gene Roddenberry's cult phenomenon STAR TREK debuted in 1966 and reflected that decade's optimistic preoccupation with space travel. Set in the 23rd century, the series chronicled the intergalactic adventures of the U.S.S. Enterprise on its five-year mission to explore the outer reaches of space. Encountering a now-iconic assembly of inventive alien life-forms such as the Klingons, Romulans, Tribbles, and Khan Noonian Singh, the ship's jump suited crew was a then unheard-of font of multiculturalism: Asian Sulu (George Takei), African-American Uhura (Nichelle Nichols), and Scotsman Montgomery Scott (James Doohan). But it was the contrasting personalities of coolly logical Vulcan Mr. Spock (Leonard Nimoy), emotionally intuitive medical officer Leonard "Bones" McCoy (DeForest Kelley), and womanising ship captain James T. Kirk (William Shatner in definitive overacting mode) that lent the series much of its charm--and spawned a rabid cult following that continues to fuel costume sales and convention bookings to this very day. This collection includes every episode of the series' second season. Beam me up, Scotty!

Coming back for a second season is the iconic starship U.S.S. Enterprise and her ever intrepid crew.

Even retouched and digitally remastered the series does still retain that 60's feel (especially with the bombastic style of the music, and of course the "military uniform" mini-skirts), there was so much of it that made for great television even for today. The effects being updated really gives the series credibility and believability for viewers and allows the original series to fit in properly with all the series that came afterwards.

With some great episodes that bring Mudd back, have the crew dealing with a Nazi style Earth and much more. In 'Mirror Mirror' we meat the alternate universe in which our favourite intrepid explorers are evil and nothing but nasty. Then there is the "Trouble with Tribbles" episode with little fuzzballs who are 'allergic' to Klingons, one kind of thinks they were stuck on what to do that episode but they really pull it off. This is another fun season and great for any Star Trek fan to watch.

Bottom line.... If you are a Star Trek fan then this is another must watch season and digitally remastered it is even better a viewing than it was over forty years ago.

Grab your mouse ears and get ready for the ultimate interactive event at 'Disney on Ice celebrates Mickey and Friends'. For the first time ever, see fearless Moana on a high-seas adventure with demigod Maui.

Follow the unforgettable Dory through the unexplored seas of the Pacific Ocean, join the Toy Story pals on the exciting ... more...