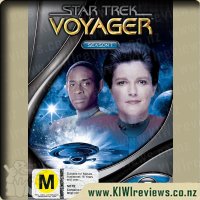 Welcome to the final season of the adventures of the USS Voyager Season 7, stranded in unknown and hostile space! While a desperate Borg Queen takes to murdering her own drones to halt the spread of individuality enjoyed by the occupiers of Unimatrix Zero, Captain Janeway's team will continue to be a thorn in her side, delivering not one, but two major blows to the Collective before finally reaching their journey's end...

Voyager is back for its final season and what a season it is.

After seven long years trying to return home the seventh season of Voyager is very emotional at times. It begins with the resolution to season six's "Unimatrix Zero," in which Janeway, Torres and Tuvok must find a way off the Borg Cube and Seven of Nine faces the loss of the precious bit of humanity that she has only just discovered. "Human Error" focuses on Seven's further attempts to explore her human side and in "Body and Soul," the Doctor gets to experience physical life in the body of Seven of Nine. He writes a novel in "Author, Author," and in the first of a pair of excellent two-parters, "Flesh and Blood," he explores what it means to be a hologram in the midst of a deadly situation involving the Hirogen, so quite a bit going on for the doctor and a lot of growth for him.

In the two-parter, "Workforce", the crew is kidnapped and brainwashed into becoming ordinary labourers on a planet with a worker shortage, Chakotay, Paris and Harry who escaped this, try to return the crews memories to them whilst Janeway struggles with trying to work out if she wants the life on Voyager or could she be happy in this 'normal' life. We also finally get a wedding and loose another crew member.

The final episode, "Endgame," is less concerned with misty-eyed goodbyes than with a bending of conventional views of the space-time continuum that leads to an exciting showdown with the Borg queen (Alice Krige, repeating her role from Star Trek: First Contact but making her first appearance on Voyager). We have Janeway from a future where it took the crew another 23 years to reach home, travel back to Voyager of today to get them home sooner than she did. This leads to a great show down with the Borg, one heck of a blow to the Borg and one hell of a final scene, seriously awesome final scene.

I loved Voyager, my favourite in the Star Trek world by far and when it ended I missed it, but it ended a great series with a great big bang.