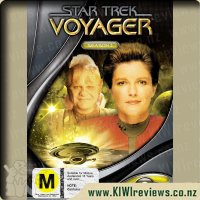 Season three of Star Trek: Voyager begins with the titular space vessel still in the hands of the enemy Kazon, and Captain Janeway (Kate Mulgrew) and most of her crew still stranded on Hanon IV, a desolate planet that closely resembles a prehistoric Earth. Eventually extricating themselves from this situation, the crew survives to embark on innumerable other adventures in their efforts to escape the distant Gamma Quadrant and return to their Starfleet Command home base.

Season three of Star Trek Voyager starts off where season two finished with the crew stranded on a planet.

Last season had the Kazon taking over Voyager and leaving the crew on an M class planet, so there's plenty in here with the crew trying to survive, the EMH and a crew member on board trying to retake the ship and Tom Paris trying to get reinforcements. A fun episode brings us two Ferengi who got trapped in the Delta Quadrant and have managed to have fool a native population into thinking they are gods, this was made even more fun by Nelix having to get done up to look like a Ferengi.

My personal favourites in this season are "The Q and the Grey" and "Coda". The first, because it is a Q episode, but also has the humour of Janeway having to deal with Q's untoward advances (he wants her to have his baby) and that we see that even in a powerful race like the Q, one little thing can send them for a loop. Coda has Janeway and Chakotay seemingly die but then things are suddenly fine, but they soon realise they are stuck in a loop, one that sees Janeway die repeatedly. The cliffhanger of the season brings back an enemy from the previous season and it was kinda fun to see the Borg quaking in their boots.

There's plenty to enjoy here and I really like that one of the key characters isn't even 'alive', way to go Voyager and keeping rocking those captains pins Janeway.

Elmo just loves letters! In fact, he loves the letter J so much he decides to change his name. Meet Jelmo! Not only does his name start with J, but any activity he does has to start with J, too.

Will everyone's favourite little red monster remain Jelmo forever? Don't worry Elmo's love of letters doesn't stop at J! He absolutely adores The A Team with Ryan Reynolds and his imagination is ignited in Fetch the Letter I.