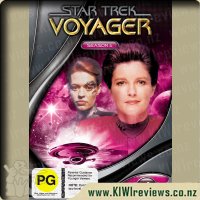 Welcome to the Fourth Season of the adventures of the USS Voyager, stranded in unknown and hostile space. This seasons highlights include the wrenching of Seven of Nine from her Borg roots and the attendant complications, a Year of Hell battling against the time-bending Krenim, and Voyagers crew used as pawns to be maimed or killed in a very real killing game played by Hirogen Hunters.

Last season ended with Voyager making an uneasy alliance with the Borg and this season starts with the conclusion and adds a new member to the Voyager crew.

In Season Four we gain a crew member, Seven of Nine, and this paves the way for great character development and angst. In The Next Generation, Picards return to humanity is very short, but this is because he was a Borg for a very short time, Seven of Nine was assimilated when she was a child and so we have her both adapting to being a human again as well as learning the behaviours and mannerisms that comes with being human. There's plenty of growth available and it is well done.

There's a really fun episode that has the Doctor in the lead, the crew manages to send his program back to the Alpha Quadrant but the ship he arrives on has been taken over by the Romulans. With the aid of the ships holographic doctor he sets about taking back command of the ship. "One" is also a good episode which does well at highlighting the change Seven of Nine is going through, as the ship passes through a nebula, all the crew but her are in status, and she soon finds herself getting a bit more than cabin fever as the month draws on.

Great character development, can't wait for the next season.

Melinda Gordon inherited her "gift" - the ability to see and talk with the spirits of dead people - from, and was coached in its use by her grandmother.

Running an antique store in a small town, newly married to a paramedic, Melinda helps the ghosts wandering around, who are trapped between worlds, by helping them to resolve unfulfilled aspects of their former life.