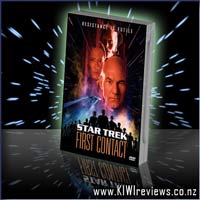 The time is the 24th century and the ship is the newly commissioned Enterprise-E. It's captain, Jean-Luc Picard, has been ordered not to interfere in a combat between a Borg Cube rapidly approaching Earth and ships from the Federation. However, seeing that the Federation is about to lose, Picard ignores his orders and takes command of the defending fleet.

With his knowledge of borg technology, they destroy the cube. However, a small spherical ship detaches and escapes, heading directly down to Earth. The Enterprise chases it and enters a time distortion created by the sphere. They end up in the mid 21st century.

The crew of the Enterprise are the only chance of stopping the Borg from assimilating Earth, and thus ensuring continuity of the timeline by helping Zefram Cochrane make his famous first faster than light travel to the stars in the Phoenix, humanity's first warp-capable ship, and thus bring Earth and humanity to the notice of a passing Vulcan survey ship. Can they save humanity and the future...

Once again the Borg are on the scene and this time they are heading back in time to eliminate us at our most vulnerable.

First Contact is one of the best Star Trek movies of the original movies. We have Picard and his crew heading back in time to ensure that Cochrane can make his first warp flight on time, catching the Vulcan's eyes and therefore ensuring humanity stays on the right track. There are a few good laughs here as well as action, so it's a good film.

The special effects are good, the Borg are terrifying as usual (really wouldn't want to meet them) and I love their attempt at changing Data. Spiner does a great job as Data being given real skin and getting the new sensations and trying to process that.

This is a great addition to the Star Trek world and if you like the Borg it is a must see and even if you don't... Watch it anyway. :)

Of all the Star Trek movies this would be my favourite. This one had it all, time travel, action, suspense, borg, the borg queen, Picard losing the plot, Data joining the borg, all very tasty stuff.
The inventive way they portrayed the possible time-paradox was nifty. It's the old 'if I go back and kill my great-grandfather, I won't be born, so then I wouldn't be around to go back and kill him, so he would live therefore I am around to go back and kill him, but if I do...' paradox loop. If the borg went back in time and assimilated Earth, then Picard and the Enterprise wouldn't be around, but here they are chasing the borg, so they must win, right? Ask any Quantum Physicist and they will reply in a variety of ways. Some say that time will split, some that that you will fade out, some say that it was all a foregone conclusion anyways and nothing you did or didn't do would make any difference anyway.
In the end it just seemed to be a case of 'The Good Guys Always Win, So Who Cares' because with only the loss of the usual handful of red-coated security clones, all of the main characters (even the barbarian human refuse on the planet at that time period, the left-overs from WW3) made it through mostly undamaged.
I was surprised to note that this is the first Star Trek movie to receive an MPAA rating higher than PG, especially as there is nothing nastier or gorier than is seen on any other movie. 'Wrath of Khan' had bugs crawling into people ears and chewing on their brains... how is a borg probe scarier than that? At least it was still just PG in NZ.
And I had to laugh at the tongue-in-cheek reference "...are you guys on some sort of star trek..." by Dr Cochran. It's a fine movie that can take a poke at itself. The cameraman even caught actor and director, Jonathan Frakes' grin at the mention of that line.
This has to be the best ST movie yet, I swear it. None that came before it are close, and imho only 'Insurrection' comes even close.

Unlimited funds have allowed Diana (McCarthy) to live it up on the outskirts of Orlando. There's only one glitch: she's financing her shopping sprees with an ID stolen from Sandy Patterson (Bateman), an accounts rep who lives halfway across the U.S.

With only one week to hunt down the con artist before his world implodes, the real Sandy Patterson is forced to extreme measures to clear his name