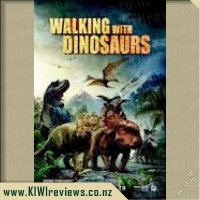 I had wanted to see this movie since before it was on our screens. I love the Ice Age series and wanted to see them 'real' not done in a cartoon way but actually see the real depth of them. It really is amazing to watch these prehistoric beings walking around, eating, fighting. This movie treats its viewers to some amazing visual aspects but unfortunately the story is rather slow and lacking.

I guess for the younger audience the story is fitting - but I expected more. I found the main characters annoying and did not care for the story at all. It tells the tale of Patches, the runt of the litter and the migration they do yearly when then weather gets to cold. His rise to greatness even though the odds are stacked against him.

To be honest I did not know anything about the movie and was rather surprised when it started that New Zealands Karl Urban was staring. The scenery at times also looked very Kiwi and after some research found out some scenes where shot here but majority was filmed in Alaska. Unfortunately Karl is only in for a short time before the Dinosaurs take over. We watched as a family and my youngest decided pretty early on the movie was not for her. My six year old loved it and enjoyed learning about different varities of Dinosaurs. Where as I was not a fan my husband did not mind it.

I must admit I learnt a bit from seeing this and did not know much about the T-Rex extended family. I loved watching the animals feed and interact with each other it really was thrilling. If only someone had killed the bird in the first scene maybe it would of been the whole package.

Dr. Ryan Stone (Sandra Bullock) is a brilliant medical engineer on her first shuttle mission, with veteran astronaut Matt Kowalsky (George Clooney) in command of his last flight before retiring.

But on a seemingly routine spacewalk, disaster strikes. The shuttle is destroyed, leaving Stone and Kowalsky completely alone - tethered to nothing but each other and spiraling out into the blackness.