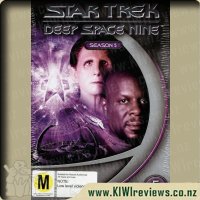 Season five of Deep Space 9 opens with a bang and does its best not to let you go.

The season opens with a now human Odo, which we have some fun with as he discovers the wonders of food. This was lots of fun but hands down, the best episode of the season and perhaps the whole series (or at least I think so) is "Trials and Tribble-ations". In this episode they used the footage from "The Trouble With Tribbles" (From the Original Series) and placed members of Deep Space 9 into the episode. A lovely little addition for the hard core fan, the agents Dulmer and Lucsly who send Sisko on his quest, their names are anagrams of The X-Files characters of Mulder and Scully. This episode was done so well, and it was near impossible to tell that they didn't belong in the Original Series.

The season deals with a few big issues such as Bashir being exposed as being genetically enhanced, Gul Dukat taking over as ruler of Cardassia and joining the Dominion, Odo's past and a huge battle between the Dominion/Cardassian fleet and Deep Space 9, with Sisko ordering an abandon ship. Though Sisko wasn't prominent in this season, the rest of the crew did such a good job that he wasn't missed at all, and Odo has some superb character development.

Trials and Tribble-ations alone makes this season well worth the watch.

Make a wish and journey into your imagination with Hi-5! From mermaid adventures to talking trees, there's so much to discover with Casey, Fely, Lauren, Stevie and Tim in this all singing, all dancing some-kind-of wonderful DVD! Dreams can come true when you wish upon a star...