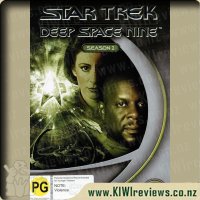 Season Two of Deep Space 9 brings us more information about the Cardassians and their occupation as well as a new threat to the Federation.

There are a lot of Cardassian themed episodes in season two, but given the timeline and the fact that the occupation of Bajor has only recently ended that is to be expected and therefore isn't too tiring yet. The characters are done well, they are beginning to trust each other but there is still a slight wariness at times which suits them well, you wouldn't expect things to be perfect instantly. Sisko is still very hesitant to be Emissary but awkwardly goes along with it to respect the Bajorans.

Deep Space 9 is a show that, because they are mostly on Bajor or Deep Space 9 can put more into the relationships between characters, and whilst this is good, sometimes drags a little bit as some parts could do with a little more action in it, but que sera. I love any shot of the wormhole opening or closing, it is rather beautiful, and the scenery on Bajor is rather nice, and I love the nose ridges on the Bajorans.

A good second season, could do with some improvement but fun none the less.