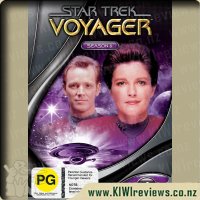 Star Trek: Voyager's sixth season continues the adventures of the Voyager crew led by Captain Janeway. While Janeway and Chakotay are keen to return to their former lives, Seven Of Nine is forced to face up to her past...

Ahhhh Voyager, you know I luvs ya!

We have episode two for the last seasons cliffhanger, and I must say that I was glad when it was over, as stated in the last review I just don't like Janeways character in these episodes, other than that this was a good season. We have another fun one with the Doctor when he enables himself to daydream. This causes problems when an alien taps into the EMH and assumes his daydreams are the real thing, fun ensues when the Doctor has to make the daydreams a reality for the ship to survive.

Each main character gets an episode geared towards them during this season, giving us more character growth and development, we also get three more characters added to the show when the crew rescues three Borg children who have been separated from the Collective. It's interesting to see how the relationships between everyone has changed, once enemies the Marquis and Federation crew members are now one big family and whilst issues still pop up occasionally it all works out well. We also get a few more communications with Earth as they gain new technology and ever so slowly get closer to Earth.

Another great season, I'm really going to miss it when it finishes, just one more season to go.

15 years of research. 2 years of equipment design. 3 years of filming. 1 film to restore your sense of wonder.

A feature documentary covering a day in the life of the bug universe, Microcosmos is an entertaining, visually stunning treat.

Microcosmos chronicles one day in the lives of the many insects living in a French meadow. Extraordinary technology brings us up close to these tiny creatures, ... more...