« Cheaper by the Dozen review

ProdID: 4299 - Cloudy With a Chance of Meatballs
Director: Phil Lord and Chris Miller 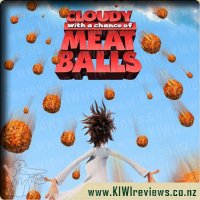 Cloudy With a Chance of Meatballs product reviews

Get ready for an exciting serving of endless fun and world-wide food disaster of epic portions for the entire family!

When Flint Lockwood's (Bill Hader) latest contraption accidently destroys the town square and rockets up into the clouds, he thinks his inventing career is over. Then something amazing happens as delicious cheeseburgers start raining from the sky. His machine actually works! But the machine starts to run amuck, unleashing spaghetti tornadoes and giant meatballs that threaten the world!

Now it's up to Flint, with the help of the weather girl Sam Sparks (Anna Faris) and Steve, his talking monkey assistant, to find some way to shut down the machine before the world is covered in super sized meatballs!

Flint lives at home with his father and his pet monkey Steve (who thanks to a translator can talk) who is crazy mad about gummi bears. Flint, despite his father not understanding and the townspeople not wanting him to, invents new things, often with disastrous results. He finally invents something that works, that is until is gets overloaded, and he along with Sam (the weather-girl) must find a way to stop it before the world becomes one giant smorgasbord.

I think my favourite thing about this movie is the awkward relationship between Flint and his dad. Flints mum dies (we aren't told when - from memory) and since then his father just hasn't known how to communicate with his son. You can see so easily in this movie that they do care and love each other, they've just lost the art of communication with each other.

What a great machine though, turns water into food, real food. Wouldn't such a gadget, if built right (and not go overboard as it does in this movie) be wonderful. I have read that there is a Could With a Chance of Meatballs 2 in the future, I'm interested to see where it takes us and to see more of Flint.