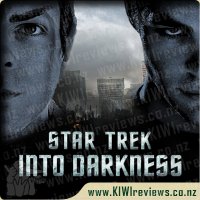 Disclosure StatementFULL DISCLOSURE: A number of units of this product have, at some time, been supplied to KIWIreviews by Hoyts NZ or their agents for the purposes of unbiased, independent reviews. No fee was accepted by KIWIreviews or the reviewers themselves - these are genuine, unpaid consumer reviews.
Available:
in cinemas from 9th May 2013

After the crew of the Enterprise find an unstoppable force of terror from within their own organization, Captain Kirk leads a manhunt to a war-zone world to capture a one man weapon of mass destruction.

I have never really been a huge Star Trek fan. Whilst I have watched many a episode of the television series starring William Shatner, I never got so engrossed, to have watch all of them, or Next Generation. In fact I don't think I've have ever seen a full classic Star Trek movie. But these latest remakes have been outstanding. Filmakers have recently come to the realisation, that people do enjoy taking part in the things that people obsess over. A to create films that anyone can follow without knowing the back-story is a must.

Star Trek: Into Darkness, certainly has a lot of action in it. And I enjoyed the mysteries that soon came to expose the folly of the Federation, and even led me to fee bad for the 'villain' of this sequel.

The special effects were seamless, and although some parts seemed very over-the-top, it still managed to keep my interest, and had me on the edge of my seat for the last half of the movie.

When this came out at the cinemas it was a must see. I had already seen the teaser trailers and knew who our baddie was going to be, I've watched enough of the TV series/movies that it was an easy guess for me.

In this Kirk and his crew head out in the hopes of catching a man who has caused the deaths of many and the destruction of a starfleet base. Things get thrown into chaos when they discover they have not one but two enemies, one from the outside and one on the inside.

The special effects were fab and really had me on the edge of my seat. The run through the Enterprise when the internal gravity was down was such fun. The acting was great and Cumberpatch was a blardy awesome bad guy. When he named himself I was going 'Yes!' and I loved that they still included an iconic Star Trek moment, but with a new twist on it.

Leaving the theatre my mind was on repeat 'that was Awesome!!!' and it's coming out on DVD this month, it is one heck of a must own for me.

I have loved the Star Trek universe since the day I saw the first Star Trek movie. The TV series always felt cheesy and under-done to me but the movie was really something special. Then I fell for the Star Trek: The Next Generation TV series and that was it, I was a fan for real. Because of that I wasn't really sure how much I was going to like the "revised alternate timeline" that was created by the previous Star Trek movie. Turns out, it was still pretty good.

My reasons for enjoying this movie are going to be really hard to write about without giving away spoilers, so I am going to leave them for the end of the review and make use of the new "spoiler guard" thing.

For now though, a bit about the movie itself, rather than the plot.

The characters are very well defined, with each revealing some interesting layers under pressure. This gives the audience something to enjoy even when the story is wearing a little thin. There's a lot of action, a little romance, a few domestics, and even some good old-fashion betrayals in the form of double-crosses, triple-crosses and even one huge long-winded 'I lost count'-cross. Thanks to Robocop-star Peter Weller for setting that one up, and Benedict Cumberbatch for nailing it as Khan Noonien Singh.

So, the spoiler bit - why I really liked this movie: I loved how a lot of Star Trek 'iconic themes' got switched around in this movie. The main oine being a radiation-soaked, dying Kirk using the classic "The needs of the many outweigh the needs of the one" from inside the warp reactor to a safe Spock - the same scene as used at the end of "Star Trek 2: The Wrath of Khan" but with the characters swapped around. As the main example of how this Star Trek timeline is different from the classic one, this is just one of a number of moments of switcheroo that had me giggling. Even locked behind this spoiler guard, I'm not going to reveal them all.

If you haven't seen this yet, it's worth seeing on the big screen. Sit close, so that it fills your field of vision for best effect.

Discover what it really means to be a penguin as the latest spy cameras give us a whole new perspective on the behaviour and extreme survival tactics of these incredible and hugely charismatic birds. Following the success of Polar Bear - Spy on the Ice, the spy cams move to the next level with Penguincam, a range of super-realistic animatronic cameras disguised as penguins, chicks and eggs.

Travelling to the freezing Antarctic to ... more...