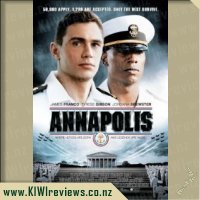 Set against the backdrop of boxing at the Naval Academy, centers on a young man from the wrong side of the tracks whose dream of attending Annapolis becomes a reality.

I hadn't heard of this film, and none of my friends knew this film, but one of my flatmates had this DVD, so I thought I'd give it a watch. Looking at the DVD cover, I had no idea that this movie would be so heavily boxing based. While reasonably enjoyable, it just seemed like a poor blend of a underdog boxing film, with an army bootcamp film ("Full Metal Jacket" anyone?".

I found James Franco to be a rather annoying lead in this film, and for a person that was acting the way that he was, I couldn't help but feel that it was a rather inaccurate representation of the Naval Academy. There were no classes, no combat lessons, nothing but boxing and obstacle courses.

The plot was incredibly thin in this film, and Jordana Brewster provided nothing in this film beyond something to look at. The only thing that I could really say that I found positive about this film, is that it made me wish I was as fit as a boxer...
Not a film that I would call successful in any way. The "climactic" boxing fight was at least reasonably realistic in its results, but the ending was predictable, and rendered the entire film near enough inconsequential.

Give it a miss.