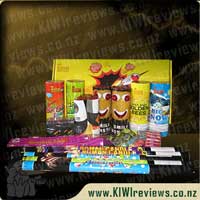 Guy Fawkes in New Zealand is a reason to dust off the BBQ for the coming summer and provide an opportunity to practice cooking that perfect steak!

The Boom Brothers company is New Zealand owned and operated and has two goals in mind. Firstly, to provide industry leading products to our customers. Secondly, to offer value for money. To achieve these goals, all of our fireworks are hand-picked specifically for the Kiwi market.

We make two dedicated trips to China every year to meet with the manufacturers to test and develop all of our products to make sure they are of the highest quality, safety and performance.

NOTE: Pack contents may vary from year to year, depending on available products.

Fireworks come in two main types: Loud, or Proud. Being a very visually-cued person, I prefer the Proud - those that put on a great display with the minimum of percussive force. Fountains, ground-effects, roman candles... those are my preferred forms of pyrotechnical entertainment... and this pack is stuffed full of those very things!

The pack has something for all ages... my youngest LOVED running around with the sparklers. While still no safer than any other firework, they are at least simple and relatively safe to use, meaning that as long as you keep a good eye on the youngsters, they can join in the fun. He took great delight in being a VIP, by throwing his almost-finished sparkler into the small bonfire we had built earlier in the day, and watching it ignite the tinder. He was so chuffed to be "the fire man..." as he dubbed himself. A small thing, for sure, but still a way in which even the youngest members of the family can participate in the festivities.

My eldest son was far more interested in the roman candles. As a bit of a science geek, he took great delight in observing them in action, then hypothesising how they are constructed, what chemicals gave the various colours, and how he could redesign one - in theory only, no way was I going to let him tinker with explosives - to give it more interest for people like him.

Of the big cluster fountains, the one I was most intrigued by was the "Smile Monster" - the casing had translucent eyes and mouth that were quite fun to watch as the firework went off. I won't say exactly what happens though, I'll leave that as a surprise for you once you buy it. But the kids will have a good laugh, I think - mine did.

Overall, considering the price tags on some packs of fireworks, especially the so-called "deal boxes" sold at some of the major chains, this is a remarkably good value pack. A total of 52 individual pyrotechnic devices for $70 puts the average cost at less than $1.35 each, which you have to admit is pretty cheap entertainment for a once-a-year event. Especially pleasing, nothing we set off was particularly loud or obnoxious... at least to me. Your feelings may differ, but there is nothing in this pack that comes even close to the self-proclaimed "Wake The Neighbours" devices some packs contain all too many of. I plan to buy this pack again next year!

99.9% of creatures that have ever lived on this planet are now extinct. Imagine if you could travel back in time and see them. And what if extinction didn't have to be forever? What if you could bring them back to the ultimate wildlife sanctuary...to Prehistoric Park?

Nigel Marven does just that as he travels back to prehistoric times to rescue some of the most magnificent creatures that have ever walked this Earth. Once ... more...