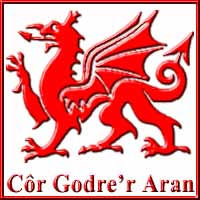 Conducted by Eirian Owen and featuring presentations by the whole of the The Aran Mountain Male-Voice Choir, as well as trio acts by Tom Evans, Trebor Evans and Sion Goronwy (The Three Welsh Basses) and performances by Aled Wyn Davies the Tenor Soloist.

I set out to see the show with a nagging suspicion that this kind of thing was going to be something I would not really enjoy. After all, a bunch of grown men singing in welsh isn't exactly Evanesence or Sisters of Mercy, my preferred kind of music.

I had a shock coming, and it was to be one I would not regret in the least. Now I understand what 'culture' really means.

Walking into foyer of the beautiful Regent Theatre in Palmerston North was like stepping back to a more cultured age, at once both wonderous and comforting. The first thing that stuck me was the standard of dress, formal enough that I felt out of place, dressed as I was in trousers and a polo shirt and vest. We took our seats as the lights dimmed, the sound system warmed up and the choir entered the stage, followed by the conductor, Eirian Owen, all to the sound of applause. The evening's entree was the New Zealand and Welsh National Anthems and recieved a standing ovation outright. A testiment to their diplomacy and consumate vocal skill.

Their musical selections were drawn from many languages, including latin, welsh, english, italian, german french, and to my great surprise considering they had been in New Zealand only a week, Maori! With songs ranging from monastic chants to Elton John, Wagner to Opera, haunting melodies to rousing Russian ballads, I had to say there was something to please even the most jaded of us. They used their voices in the manner of a master painter's brush, to paint wonders in our hearts and minds. Their voices were like their culture, full of vibrant, swelling power.

The true test of their skill was when Eirian Owen stood away from the piano keys, and conducted the choir in a selection of tunes acapela, which went off without a hitch, once again proving the powerful talent present on stage.

The choir had a number of small rest breaks while the soloists and the Three Basses performed under the spotlight, combining the beautiful power of their voices with warm and witty monologues between songs. Of particular note was the rich bass of Sion Goronwy, the man who puts the Mountain in the Aran Mountain Choir, due in no small part to his impressive stature and power of vocal presence. His rendition of "Down Below" contained passion, power and tastefully rough humour totally appropriate to the song itself. If you are unfamiliar with the song, I heartily suggest you investigate it, as calling it a Sewer Worker's Song is akin to calling a Monet masterpiece 'a good painting'.

Also worthy of note was Eirian Owen herself, surprising us all with her Maori singing and her consumate skill in conducting the choir. Her hands wove a tapestry of sound and emotion, with fine pitch control and perfect harmony.

It was heartening to see members of the audience chair-dancing along to the more up-tempo tunes, and it filled me with pride to hear many audience members singing along with the two National Anthems, it goes to show that this sort of culture crosses all social boundaries and makes equals of us all. Even those of us dressed below the standard.

In summary, should I get the chance to experience another show of this calibre, I will seize the chance with both hands.