« The Void : 3 : The Evolutionary Void review

Doctor Who - Time and the Rani review 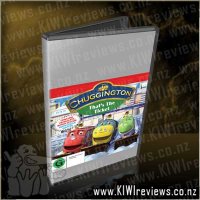 Honk your horns - toot! toot! It's the traintastic world of Chuggingtonchugg where eager engines Wilson, Koko and Brewster are learning to become working trains.

There's loads more fun on the rails as the trainees compete in the Chugger Championship Race; Wilson has cool adventures with Frostini the ice cream chugger; Koko tries to give a smooth ride to the examiner in her passenger test, Brewster gets a distracting hobby and they have all kinds of fun and mischief as they learn about life on the tracks.

This new DVD also includes a traintastic bonus episode - Snowstruck Wilson, as snow falls in Chuggington, it's time for the traintastic crew - Wilson, Koko and Brewster - to honk their snow horns, light their lanterns and push those snowploughs.

So come and join Chuggington with 8 snow-tastic episodes, the perfect stocking filler for your little eager engine this Christmas!

We are massive Chuggington fans in this house, it seems to be one of those children's shows that's never on telly enough so the DVD versions are awesome!

This has 8 episodes on it, so theres lots to watch on a rainy day (or when mum needs a break!) or good to say 'you can watch only 2 this morning' etc. Each episode faces an issue that the trainees need to overcome. I love that it teaches the children that all actions have consequences, such as Wilson staying up all night!.

Its good to see some other trains in these such as Frostini (the ice cream chugger with the cool accent!) and the change in seasons to the snow is also cool and lets the children develop and think about seasons and the weather and how snow happens etc. Lots of 'extra' meaning can be taken from these wee episodes.

The songs are catchy, yet not annoying and the animation is bright, clear and colourful. 10/10 here!

I did not even make it in the door from picking this DVD up, when my 2 year old son saw what it was and took it out of my hands. So I went and put it on straight away for him, you should have seen his little face light up with joy.

The DVD packet is a neat one with a handle on the top, it made it easy for my son to carry over to the DVD player as he loves to help out.

The DVD menu came up quickly, unlike most kids DVD's we have that cycle through a few ads for other DVD's. It was very easy to navigate to where we wanted to be.

We also found the picture quality to be crisp and bright. The sound was great and we could hear what they were saying over music and the sound of the trains' bells and whistles.

This is a great little collection of Chuggington episodes, and we loved that it had 8 full episodes on the one DVD. Each episode is about 10 minutes long, with a total of about 80 minutes, which I feel is a great time length for little kids.

Since getting this just over a week ago my son and other children have watched it at least twice a day and they are still glued to it whenever it is being played, their favourite episode would have to be 'the ice-cream factory' in which Wilson nearly lets down the whole town for an upcoming ice-cream event.

I would highly recommend this to any family with pre-schoolers/toddlers as it is bright, fun and with-out really noticing, learning about time management and getting jobs done before playing games, which the Chuggington trainees seem to have big trouble with.

Florence is thrown into chaos in the wake of the Pazzi conspiracy and Leonardo da Vinci must push the limits of his mind and body to defend the city against the forces of Rome. When the dust settles, friends are buried and rivalries enflamed. While the Medicis go to unthinkable lengths to deal with new threats, da Vinci continues on his quest to find the fabled Book of Leaves and uncover the secret history of his mother. He'll come to ... more...