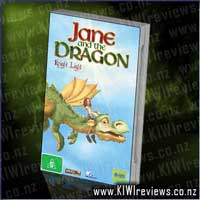 Disclosure StatementFULL DISCLOSURE: A number of units of this product have, at some time, been supplied to KIWIreviews by Roadshow (NZ) Ltd or their agents for the purposes of unbiased, independent reviews. No fee was accepted by KIWIreviews or the reviewers themselves - these are genuine, unpaid consumer reviews.
Available:
November 2009

Together they have a series of adventures unlike any you can imagine. While Jane is studying to be a knight, she also has to look after clumsy Dragon, and stick up for him when things go wrong. It's a tough job, but Jane is a good friend and always knows the right thing to do.

Once again it was time to entertain the youngest members of the family during our annual "Summer BBQ" (If you can call the weather alternating between muggy overcast and freezing rain "summer"). Knowing how much my youngest niece adores this show I had stocked up and now had all 5 volumes so far released, this being the fifth. Apparently she was pretty excited to come over because "Uncle has such a cool movie collection" which I had to laugh at since I know more people with wider selections than most video stores. With the weather unable to make up it's mind and the kids having commandeered the only room in the house big enough for us all we were required to sit through the entire four episodes of this installment.
As I discovered by watching the previous dvd, these stories are not only great for kids but also quite entertaining for adults too. Every episode shows new ways to know that there is always something to learn about friendship in the face of adversity when true friends stand by you and those who only claim friendship when it suits them turn away. By far my personal favourite on this disc had to have been 'Fathers'. It clearly showed what it means to be a loving father and how tough it is to balance the trust in a child's abilities against the need to protect and be there for them. Every father should watch at least this episode.
Another great dvd, very muchy worth buying. For a green-note its a great investment for the kids. Entertaining, educational in a subtle not-in-your-face way, and best of all Kiwi-Made. I am again astounded by the amazing animation and texturing that gives a 3d enviroment a pencil-sketch feel without making it feel too much like a cartoon. Go Weta!

We see who we want.

Season 3 of The Affair picks up three years after Noah's shocking admission of guilt at the murder trial of Scott Lockhart. Noah attempts to restart his life, but the damage wrought by his past decisions has made him a ghost of his former self. Alison has been raising daughter Joanie alongside Cole and Luisa in Montauk, but Alison's past continues to rear its ugly head as Cole and Luisa attempt to build ... more...