« Every Which Way But Dead review 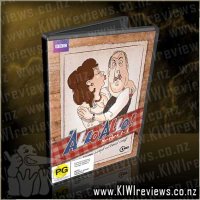 Disclosure StatementFULL DISCLOSURE: A number of units of this product have, at some time, been supplied to KIWIreviews by Roadshow (NZ) Ltd or their agents for the purposes of unbiased, independent reviews. No fee was accepted by KIWIreviews or the reviewers themselves - these are genuine, unpaid consumer reviews.
Available:
August 2010

Rene is the most wanted man in occupied France. Women want his body. The resistance wants his brain. The Nazis want his sausage!

'Allo 'Allo! follows Rene Artois - cafe owner in the Nazi-occupied French town of Nouvion, and his efforts to appease a range of opposing factions - including the French Resistance and the German SS - without being killed.

With the German army practically in residence in his cafe, Rene risks his neck to aid the Resistance by hiding two British airmen and a secret radio transmitter. To make matters worse, the knockwurst sausage that hides the priceless painting of The Fallen Madonna by Van Klompf from Hitler, is kidnapped by the Communist Resistance! These problems however, are insignificant compared to what Rene faces, when his wife Edith finds out about the affairs he's having with his two sexy waitresses...

With ingredients such as unsubtle double entendres, a raft of crazy characters and even crazier plots, a wealth of catchphrases and of course the character of Rene as the most improbable of French heroes - 'Allo 'Allo! is sure to have you laughing time and time again.

This boxed set includes all 27 episodes from Series 1-4, including the pilot episode and the 1985 Christmas Special.

I have this show on DVD and I have my favourite episodes but then it is almost all of them. I would watch and I know my gran would watch and then we would compare which parts of the episode was best and be in stitches laughing all over again.

I know the subject matter is serious but the actors did such a good job at making us laugh that you would almost forget that it was such a horrible and serious time. I don't really have any favourite characters but did like Rene and the trouble he got himself into just by being himself. I don't think we ever saw any nudity but the sexual innuendo was obvious to see, you would have to be totally innocent not to understand some of the jokes.

I'm sure that the actors had a lot of fun doing the series. there was a lot that could go wrong with the plans and often did go wrong. I'm sure that Rene had the most wanted sausage in history.

I will be watching this again when I feel the need for a laugh, I would have the kids asking questions as they often wonder why mum is "laughing like a madman" but then that is unavoidable when watching 'Allo 'Allo

I watched this growing up when it was rerun on SkyTV's UK channel. 15 years later and I now own season one on DVD.

I really enjoy British comedy, but in saying that, this would have to be one of my top 3 favourite TV comedy shows. If you don't like sexual innuendo, though, then this isn't the show for you. I have always like how 'sexual' the show could be without removing any clothing at all.

Add in the police officer with the appalling French accent, the affair with his two waitresses (who couldn't find out about each other, and he couldn't have his wife find out either).

I think this is a timeless show, as even though it's not set today, the jokes and humour are still just as funny today as it was back when the show came out.

I can easily remember watching the latter half of Series 4 many years ago... perked on the couch with a drink and a sandwich, trying not to spray food everywhere with each laugh.

After over 20 years, it's great to once again sit back and have a giggle at the show, understanding more of the 'adult' jokes now that advancing... erm, time... has given my mind a chance to marinade and sink a little lower into the gutter while my linguistic experience has expanded the vocabulary enough to cover the concepts that once scooted over my youthful head.

I have always found that British wit was such that taken at face value still left you with something worth laughing at, but the heavy jokes were always a few layers deeper, needing an older mind to unlock them... I guess that's why the old goldies still hold appeal today... take "Open all Hours" for example! Who can't still laugh at that carnivorous cash register!

In this series, by far my favourite character has to be poor Rene... beset upon by all sides, walking a razor's edge to get through each day hoping not to get shot by the Germans, or the Resistance, or the other Resistance, or worst of all, his wife! In terms of sheer bare-faced stupidity, the character most likely to win the "Serious Groan" award would have to be the British Spy disguised as the Gendarme, aka French Policeman. "I was just pissing by the door and I thought I heard a gunshit. I have come to investegot." Some of his mispronunciations are seriously tooth-grating, but some still make me laugh even today.

Overall, this is by far one of the more enjoyable trips down Memory Lane, and even includes a nice tea and scones in Nostalgia Cafe... after all this time it was lovely to see my old friends Herr Flick of the Gestapo, Helga, Hans, and the Colonel from the German Army, the ever delightful and impossible to disguise LeClerc, oh and we can't forget the delightful Let. Gruber and his little armoured car with the big gun sticking out...

For those who recall this series fondly but haven't seen it in ages, you really should get this... it brings back some great times where humour was smutty and innuendo was rife... but the clothes never came right off!