ProdID: 5573 - Rise of the Continents
Type of Show: Documentary 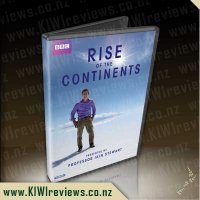 Disclosure StatementFULL DISCLOSURE: A number of units of this product have, at some time, been supplied to KIWIreviews by Roadshow (NZ) Ltd or their agents for the purposes of unbiased, independent reviews. No fee was accepted by KIWIreviews or the reviewers themselves - these are genuine, unpaid consumer reviews.
Available:
June 2014

Rise of the Continents product reviews

Presented by Professor Ian Stewart, Across the Earth, there are traces of a mysterious long-lost world. From seashells 8000 meters above sea-level to species that seem to have jumped thousands of miles of ocean there are tantalising clues out there to the existence of a land unlike anything we see today.

As they are pieced together, The Rise of the Continents will reveal the incredible story of how our world came to be and the nature of the land that came before. In this four-part series Professor Stewart follows a trail of clues through a land that no longer exists.

I was chosen to review this 2 disc DVD set from KIWIreviews and was really looking forward to its arrival. When it arrived I couldn't wait to sit down and watch it all, but reading the back I noticed it had a viewing time of 3 hours and 20 minutes. As a mother of 3 it is often hard to find an hour or two to myself so over 3 hours was not going to happen. Luckily this is a 2 disc pack which meant I would be able to watch one disc one night and the other disc the next night. So once the kids were tucked up in bed I settled in to watch disc one.

Each of the discs has two episodes (documentaries) on a different continent, each believed to have been part of the much larger long-lost supercontinent - Pangaea. Disc ones episodes were Africa and Australia. It is not until you are presented with a detailed commentary and filming of the world we live in that some, like myself, realise how very little we know and understand about our lands. Africa is one of my favourite places. I doubt I will ever travel there, but after watching this it has most definitely moved closer to the top of my bucket list. Disc two was about the Americas and Euroasia. Even though I only intended on watching dizc one, I couldn't help but watch disc two straight after even though it meant not going to bed until 2am.

I was amazed by how much there is to learn from studying the land and surroundings we walk in, and learnt so very much from this documentary. Of the 4 this would have been my favorite. I loved that Professor Stewart explained how long ago the continents were as one land mass, how long it took for them to seperate and end up where they are now. The filming of each area he travelled to was absolutely stunning. We really are truly blessed to live on such an amazingly stunning planet.

I was especially interested in the separation of Australia and Antarctica and also the Salt planes which I had no previous knowledge about before. I wont go into detail as I don't want to give anythung away. I loved that these documentaries not only showed us the now but also showed or mentioned events from many years ago like when Scott went to Antarctica. It also gave a glimpse into the lives and livelihoods of many of the people living in these places. Each so amazing yet so completely different from the next.

A truly beautiful, well researched, astounding, and informative look into how our world began, progressed, is and may become. I thoroughly enjoyed watching these documentaries, so much so I watched them again this morning. There is so much informatiom that is amazing, I still learned so much watching for the second time.

The 20th series of the world's most popular car show sees Jeremy Clarkson, Richard Hammond and James May in typically explosive form. In the course of six packed programmes, they set out to race a car against an America's Cup yacht up the coast of New Zealand, launch a highly scientific process to find the world's fastest taxi, and do their bit for European economic turmoil by blasting across Spain in three 'affordable' ... more...