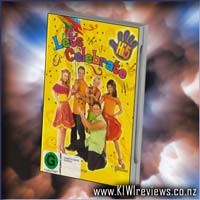 Disclosure StatementFULL DISCLOSURE: A number of units of this product have, at some time, been supplied to KIWIreviews by Roadshow (NZ) Ltd or their agents for the purposes of unbiased, independent reviews. No fee was accepted by KIWIreviews or the reviewers themselves - these are genuine, unpaid consumer reviews.
Available:
Yes

It's celebration time with Hi-5 and you're invited to join in all the excitement!

From birthdays to Christmas and even Carnivale, there's so much to enjoy. So put on your party clothes and slip on your dancing shoes - let's celebrate the Hi-5 way!

He loves the dancing the most, and if I pretent to be asleep when he wakes up in the morning, I can watch him as he grabs the DVD out of it's case, put it in the PS2, turn on the TV with the remote, hit >play< on the PS2 remote and start jigging along to the music. It's delightful to watch.

With a far more bouncy and active theme than his other favourite, Star Dreaming, with it's peaceful, restful tone, this is a great one to get him woken up and feeling good in the mornings.

Overall, a definite hit in my son's book, and thus a clear winner in mine too. :)

When the Mer pups' magical city of Puplantis begins to collapse, it's up to the Sea Patrol to find out why before it's too late.

Then, see how the pups stop Sid the Pirate and his first mate Arrby from stealing the Sea Patroller, and save a giant sea slug's home!