ProdID: 6313 - Game of Thrones: Season One
Type of Show: Fantasy 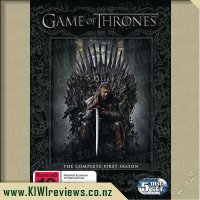 Summers span decades. Winters can last a lifetime. And the struggle for the Iron Throne has begun. It will stretch from the south, where heat breeds plots, lusts and intrigues; to the vast and savage eastern lands; all the way to the frozen north, where an 800-foot wall of ice protects the kingdom from the dark forces that lie beyond. Kings and queens, knights and renegades, liars, lords and honest men‚¶ all will play the ‚òGame of Thrones.‚ ™ George R.R. Martin is an amazing author, but not just because of his ability to create characters that evoke such emotion, but because he is also willing to sacrifice them. The weakness of many novels or television shows is that they invest so much time building and improving a character's depth and skills, that they become unbeatable, and the storyline becomes predictable; a simple enemy that is difficult to beat but will eventually be overcome.

Game of Thrones follows a number of families of the seven kingdoms. While it focuses mainly on Baratheon, Lannister, Targaryen, and Stark, all families have significant roles in the series and are capable of taking out major characters of each family. The initial pull of this series is the medieval theme, with family feuds, competition for a path to the throne, and plenty of action. But it is the drama that keeps you watching.

The number of characters is too immense to be able to properly communicate through a review, but after you watch several episodes, you know all their names, their heritage, their battles, and as you watch the characters grow up in front of your eyes, you become attached to them. You grimace for all of the characters you despise that survive, and you cry out in emotional pain as the characters you love get cut down in their prime, if not at a younger age.

It really is intense to watch, and after several episodes you will be hooked. You can't miss an episode because anything could happen to your character in that one episode. It is the epitome of a successful series. I would recommend watching the entire season in a marathon to get the full effect of the story. It is so engaging that you quickly forget that you are watching a series that includes nudity, murder, incest, and rape. It deserves its R rating.

My only true problem with the series is that I wish the episodes could be filmed quicker so I don't have to wait for the rest of it, and the knowledge that this series is based on a book series that hasn't been completed yet.

When this came out I wasn't really fussed on the idea of it, my dad sent me a txt after a few weeks asking if I was watching it, to which I wasn't, and every season premier since he has asked if I'm watching it yet. Leading up to Season Five, Sky TV has been playing the entire series from scratch but I missed the start (yet again), but after seeing a few minutes here and there I thought "why not"? and my husband and I have finally hired out and watched Season One.

This show does a lot of flipping between characters and what they are getting up to but it is set up well enough that it never feels confusing and it certainly doesn't feel like there's too much crammed in, which I was worried about. Right from the start I had my favorite characters and was often wanting the others to get their story out of the way so I could see my favorites again. There's such a great range here from witty, sly, conniving, egotistical, naive and so on, it all comes toether so very well and each has been portrayed really well.

The acting is great, I didn't have any that I felt could have been done better and comparing the yougest of the actors to the eldest, they all acted as well as the other. As I said above, right from the start I had my favorite, but I also found it easy to pick out who I wanted to fail and who I wanted to see more of in how they were presented on screen. The scenery is really well done and none of it feels fake, a little behind the scenes clip I saw tells me that when they're filming in the snow.... they're literally in the snow, none of that fake stuff!

I enjoyed this more than I thought I would and whilst I'm not scrambling to watch the next season, I do want to know who dies (as I know the body count is high, and I want my favorites safe and sound please, or at least alive....) and just how the story finally ends.

Score: 10.0
Product reviews for listing 3881: Guess How Much I Love You: To the Moon and Back -  Type of Show: Children's Animation

The Summer meadow is home to a many amazing treasures of nature.