Heard of Diwali? A million lamps floating on a river and fireworks to wake the dead.
Heard of Holi? An explosion of colour and joy and massive dry cleaning bills?
Heard about Onam? It could be the craziest of them all.

Indian Ink continues to bridge cultures and expand boundaries with this utterly disarming new comedy that seats the audience around the dining table and at the kitchen bench in the back room of Krishnan's Dairy.

Now her son is grown up Mrs Krishnan is thinking of selling the shop. It's Onam, a time to celebrate life, death and rebirth and Mrs Krishnan has to throw the party of her life.

This joyous, heartwarming show picks up the story twenty years on from the production that started it all - Krishnan's Dairy. 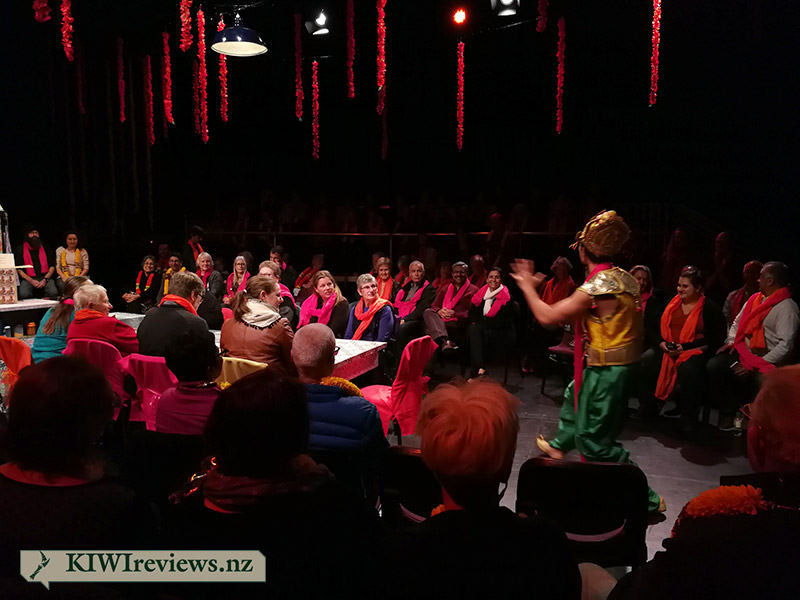 If ever there was a deep and meaningful question proposed in a way that was effortless and so smooth the audience didn't get it until much, much later... this is the key question of this play. Mind you, to call this a 'play' implies a form of entertainment where the players and audience sit on opposite sides of an invisible but impenetrable barrier called 'The Fourth Wall" - that boundary between the world of the play and the 'real world', it's a form of escapism, or voyeurism, depending on how the play is pitched. There was no Fourth Wall here, the audience were treated as though they were actual guests to a surprise party, both welcomed and involved in the performance in a very real and hands-on way - some audience members even got roped into cooking up some delightful Marsool Dahl - a spiced red lentil vegetarian dish flavoured with ginger, garlic, onion, cumin, and other spices, served on or with steamed rice. And yes... it was really cooked during the show and handed out to the audience at the end. (Mr K not included.

So, the play is, at first glance, all about Onam - the traditional Harvest Festival wherein family and friendship is celebrated and enjoyed, and everyone's bellies and souls are fed by good food and company, joy and laughter. However, we are soon informed that Mrs Krishnan (aka Mrs. K) is not one for this celebration... her husband has passed away, her son is now an accomplished architect, and she awaits his arrival for Onam... not that she planned to actually celebrate it in any real way because of how it reminds her more of what she lost, than what she still has. We are also introduced to James, her young boarder and surrogate son... whether she likes it or not.

James tries hard, but hasn't really found his feet. He also has no idea what is involved in living away from the shelter of a house run by a chronic mothering sort. $80 per week including food, laundry and utilities... yeah, those were the days.

However, James is a good soul, he cares about Mrs. K after a fashion, and he has worked very hard to put on a surprise Onam party for Mrs. K, not knowing that she already had plans, and a shocking revelation that could shake James' world to its very bedrock... she's decided to sell up and go back to India!

As the show progresses, we are treated to a lot of audience interaction and involvement, some wonderfully laugh-inducing moments, and more than a few heartbreaking ones too. We see what happens to someone when their heart is broken by an old memory, burned by a fresh betrayal, and finally resurrected and refreshed by the loving warmth of strangers becoming friends. There were moments I wanted to laugh out loud - often at somewhat inappropriate moments - but also quietly weep in sympathy for Mrs. K's loss, cringe at James' Pepper Confusion moment, and even a few get-up-and-dance impulses flitted across my awareness. Thankfully, my self-control spared the rest of the audience the horror of seeing me try to dance.

I have to say, though I am not a huge showgoer, I have been to a few and this is the first one where actual food prep was casually woven into the performance in a way that felt genuine and appropriate, and still ended up with actual real food that could be eaten (and enjoyed) afterwards. It was a novel twist for me, and I took great pleasure out of eating a portion and chatting to other audience members to gauge their impressions. To say that they were varied would be an understatement, but all agreed the show was well worth seeing, gave some very poignant moments that prompted reflection upon one's own life, and was very well done.

A special note on the excellent dancing and improv by Kalyani Nagarjan who played Mrs. Krishnan. Though far younger than her character, Kalyani played the part so well that it took me a while to realise that she was in fact not in her 50s. I had to giggle a little at the accent she put on, which was only noticed as an accent at the end of the performance when she stopped using it. It may strike some as a little stereotypical 'Indian dairy owner' but I have to say, it was very authentic and instantly recognisable for what it was trying to portray.

Justin Rogers took the role of James the boarder, and he did a great job of putting across a naive young man who so desperately wants to do something special for someone he cares about, even if he doesn't really know what's going on, can't get the mythology behind Onam quite right, and really doesn't know what he's doing with himself. While there was no attempt to bring a high degree of realism into the show, I must admit I could easily see this being a real-world scenario hidden away behind a beaded curtain in the back of a dairy anywhere on the planet, and it thus I would class the performance a complete success. This was a performance that skillfully wove traditional practices and modern life into a new tapestry that was timely and timeless at the same time, and entirely relevant to life today.

Was the show funny? In places, it certainly was... you'll never make Dahl without checking your ingredients carefully again after seeing this. While not a laugh a minute, the humorous portions made me laugh as much as the heartbreaking moments made me want to weep, the tense moments made me want to hide my face, and the smell of the dahl made me hungry. Overall, a very successful performance... and if you see there are tickets available at a showing near you, I strongly recommend to grab a seat and sit back for a few hours in the back room of Krishnan's Dairy.

For more than 70 years, Buzzy Bee has held number one place as New Zealand's favourite toy. This first animated television series sees Buzzy Bee and friends transformed into adorable animated characters. Join Buzzy Bee and all his friends on their new adventures in Rolling Downs.

The series characters are voiced by a stellar line-up of ... more...