The Great Wall of China review 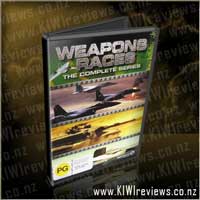 This series looks at eight of the most significant weapons races to transform modern warfare, from the original concepts that overturned military thinking to the most advanced versions of each weapon in service today.

Whether it's a new idea such as radar, or a series of breakthroughs producing a dramatic new weapon like the jet fighter, in every case it means that enemies have to react with their own countermeasures - often starting a potentially catastrophic competitive spiral.

Always been a fan of machines, and their evolution has been of great interest to me as far back as I can remember... and though I deplore the uses to which we, as a species, put the results of our creative sparks, I am always amazed at the way clever people can always find a new twist on an old idea to come up with something that turns the tide of events.

This series walks the viewer through the evolution of 8 of the key machines and systems that were developed before, during and after the various wars. It akes you back to the first of each kind, then step by step leads you up through the years to the most modern version... the current state of 'ultimate'.

This series, though certainly more 'mature' in terms of content - it's war machines after all - is in a format that reminds me of the 'The Most Extreme' series which is aimed more at the younger viewers. This title includes a lot of actual archive footage from the wartime labs and tests, plus a lot of CGI virtualisations to help bring the material to life for us 'visually cued' learners.

Overall, for those who can appreciate the mechanics of war machines, despite the fact they exist solely to kill, this is a fascinating series. Someting that really caught my attention in a good way was how many of the trails were quite strongly intertwined, how each machine became reliant on, or was depended on by another, for their joint evolution. Mechanical Darwinism, if you will. That really brought it all 'home' for me. For those who simply enjoy learning, this is good 'snackfood' for the mind.

A gang of five teenage outsiders - party girl Alisha, Hard as nails Kelly, One-time sporting hero Curtis, Painfully shy nerd Simon and smart-alec Nathan - get caught in a freak storm while on community service and suddenly find themselves with strange superpowers. All find themselves with a power they didn't choose or want - a power which reveals their deepest, darkest ... more...