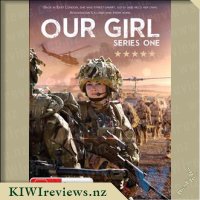 Molly Dawes is a smart-mouthed, stroppy teenager who lives with her parents and four young siblings in a tiny council flat in east London. Dad's on benefits, Mum's pregnant again and after leaving school with no qualifications, Molly is working in a local nail bar. We can see the expected narrative of her life - and so can she.

When she discovers at her 18th birthday party that her boyfriend is cheating on her, Molly gets drunk and ends up sick in the doorway of an Army Recruitment Office. It's a pivotal moment in her life. Realising there might be a better future waiting for her, Molly soon joins the army - and heads to the brutality and grim reality of Afghanistan. Watching this series, I can't help but feel that it had a very low budget. While the environments are reasonably diverse, the number of major characters in the cast list is very low. The cast pretty much consists of Molly, her parents, and her love interests. None of the other cast ever receive any form of character development, and this unfortunately has a significant impact on the viewability of the show.

When I first saw this title, I had a feeling it would be more towards drama than action. The blurb provided an overview of the show that made me intrigued. A female lead in a brutal and grim army drama. I enjoy watching a strong female character. But I was rather let down. The action is near enough non-existent; most "kills" occur off-screen or during a different time period. This combined with a rather antisocial protagonist led to me feeling well aware that I was not immersed in the plot, but it felt like the protagonist herself was a spectator.

This series is undoubtedly English. The accent is very apparent and piercing, and the "before" social life is very much as one would expect from a British lifestyle. However, I really couldn't get into it. Molly just wasn't really a likable character. The show flitted from one thing to the next without delving any deeper. The character's inability to spend time with friends, or talk with anyone, left me with a very one dimensional character, as it lacked proper narrative.

The entire description of the series above outlines the storyline for Episode 1. Everything from trying to explain her backstory, to showing current issues, to joining the army, completing training, and getting sent to Afghanistan; it all happens in the first episode. And yet it still feels slow.

As the series progresses it improves as the love interests are added to the mix. While I normally hate the addition of characters purely so the woman has someone to fall in love with, by the time I got to Episode 2, I was desperate for her to have a proper connection with anyone so that I could see some developments. The interactions improved over time, but was still rather predictable. During the six episodes, I watched about three "tours" which meant the timing passing was extreme and the military activity was very much shortened and condensed to a level that made it difficult to follow. As opposed to having a little mini-goal adventure for every episode, I would have preferred one goal over the series that they slowly worked towards, as an overall point to the missions was absent.

As far as casting goes, Iwan Rheon (aka 'Smurf") was the most convincing character for me. And considering he plays a bit of a maniac in 'Game of Thrones', that is really saying something. The production quality was good, and the gear, weapons and facilities looked realistic, but I just didn't feel involved or concerned with the protagonist. It was okay. Not a series that I would rewatch, but it was alright. Perhaps if they boosted the violence and gore up a notch...