« Chronicles of Narnia: The Lion, The Witch and The Wardrobe review 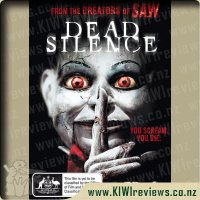 There is an old ghost story in the sleepy town of Ravens Fair about Mary Shaw, a ventriloquist who went mad. Accused of the murder of a young boy, she was hunted down by vengeful townspeople who cut out her tongue and killed her. They buried her along with her "children," a hand-made collection of vaudeville dolls. Since that time, Ravens Fair has been plagued by death. The ghastly dolls from Mary Shaw's collection have gone missing from the grave and reappeared over the decades. In the dead of night - wherever they are glimpsed - families are found gruesomely murdered....with their tongues torn out.

Far from the pall of their home-town, newly-weds Jamie (Ryan Kwanten) and Lisa Ashen thought they had established a fresh start. But when his wife is grotesquely killed, Jamie reluctantly returns to Ravens Fair for the funeral, intent on unravelling the mystery of her death. Once reunited with his ill father (Bob Gunton) and his father's new young bride (Amber Valetta), Jamie must dig into the town's bloody past to find out who killed his wife and why. As he uncovers the legend of Mary Shaw, Jamie unlocks the story of her curse and the truth behind the song from his childhood: if see her and scream, you will never speak again.

I'm not really a person who seeks out horror movies, the only reason that I do is because of my husband, but I don't bother as I find the tactics used to scare people annoying and it's just far too easy to figure out who is going to die and what is going on behind it all.

Jamie gets a strange puppet in the mail and thinking nothing of it goes off to buy his wife some dinner, while he is gone his wife is murdered. He returns home to bury her only to find out he is part of a curse laid upon his ancestors and must find out what to do to end it before he too dies. What follows is a bunch of horror movie cliches, but in this case they weren't too bad.

The setting is very dark, dank and dismal but that is very suiting for this movie. The special effects are good and the frights come in a good amount, sometimes fast and furious. There is also a little intrigue going on as our main character tries to work out just what went on and is still going on today. The sins of the father and all that.

It works out well when a horror movies ending surprises me so I am ok with watching this one again.

Chloe sees Mr Stinky every day, but she's never spoken to him, which isn't surprising, because he's a tramp, and he stinks.

But before she knows it, Chloe has an unusual friend hiding in her garden shed when it looks like Mr Stink and his dog Duchess, might be driven out of town. As Chloe struggles to make sure no one sniffs out Mr Stink, she also has to cope with an overbearing mum, her put-upon dad who has a secret ... more...