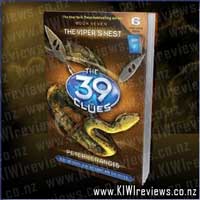 Disclosure StatementFULL DISCLOSURE: A number of units of this product have, at some time, been supplied to KIWIreviews by Scholastic (NZ) or their agents for the purposes of unbiased, independent reviews. No fee was accepted by KIWIreviews or the reviewers themselves - these are genuine, unpaid consumer reviews.
Available:
February 2009

The hunt for the 39 hidden clues that lead to an unimaginable power have taken a heavy toll on 14-year-old Amy Cahill and her younger brother, Dan. They've just seen a woman die.

They're wanted by the Indonesian police. They're trapped on an island with a man who knows too much about the death of their parents. And a tropical storm is rolling in.

Just when they think it can't get any worse, it does. because the Cahills have one more rattling skeleton for Amy and Dan to discover... the terrible truth about their family branch.

As with all the other books, it didn't take me too long to polish this one off - it would have been a little quicker, but with family distractions, well, it slows things down somewhat....

However, like the previous books, this book chugs along at a fast pace, leaving one breathless until you reach the end, and that empty feeling starts when you realise you have to wait until the next book is published - which we hope will not be too long.

The book starts where the previous one left off, and introduces some nagging doubts between the Cahills about their nanny. But what happens next? The deeper seeds of doubt start to surface again about who can Amy and Dan trust. Who is looking after them and who is trying to kill them?

And do they find out which branch of the family they belong to? That is something you will have to read and find out - unless you are too impatient to read the book, the Cahills belong to the....

One thing that did bug me, was in the first chapter when Nellie starts speaking like a Californian 'Surf dude' with "Like" being used in every other word in one long sentence - but thankfully that didn't last.

Overall, the book is as seemless in the series as any of the other books and I find myself constantly impressed that a group of authors got together to plan the story, the characters and the clues without seemingly putting their own stamps on the characters. This would have taken a huge effort and so I really take my metaphorical hat off to everyone involved.

Once again another well written book in the saga of Amy and Dan Cahill. I think each book in this series is getting a little bit grittier, but still manages to keep it to a level suitable for children to manage.

This time around, the Cahill children travel to South Africa, and do some digging into the past of another famous Cahill 'Shaka' a Zulu warrior, as well as Winston Churchill (British Prime Minister during WWII), on top of all this is also the question of can they trust their au pair Nellie Gomez?

As with all the other 39 Clues books this one has a few "I didn't see that one coming" moments, especially the revelation of which branch Amy and Dan are from.

This series of books is one of the few around that my oldest son loves to read (and have read to him), in fact it is a nightly ritual for me to read him a chapter before he goes to bed, which I really love.

39 Clues is currently my second favourite children's series (behind Harry Potter), primarily because, with every installment, we learn more about the characters and the plot thickens in unexpected ways. Book seven takes Amy and Dan to South Africa in search of their next clue and by the end, they discover some horrifying truths about who their parents really were...

I read book seven in one sitting, just like all the others, and found myself engrossed by the mysteries, puzzles and tidbits of history - who knew Winston Churchill went to South Africa?!?! I certainly didn't. There was also mention of apartheid and what that meant for the people living in South Africa, though it in no way preached to the reader. That is the thing I love most about this series, the way it makes history so accessible. I wish more children's books did this.

All in all, another excellent volume in the ongoing saga! I can't wait for the next one, and to discover what they need all these clues for!

The author of this book, Peter Lerangis, gave me a little surprise because he also wrote book 3,'The Sword Thief', but that was only little, and the cover was interesting as well because it looks very much like something from Africa. The snake looked cool too as it looked like a Python which is one of my favourite snakes.
I was a bit stumped with the book code, but it turned out to be a code I'd know in any form. The book clue was tricky as well because I got stuck between two ideas, but it got explained in the end. The only bad part was when Dan nearly died of poisoning, but it was OK other than that. The book's "WOW" rating is just as good as the previous books, so I can't wait to read it again. When I had finished the book, I was glad to find out that they're not Tomas because the Tomas are soooo viscious. The hunt continues and soon it will be up to you to complete it. Good luck :)

Yes, and old dodger like me really should read a little closer to my age, I admit - and I have, too many times to count - but I have to admit that it is rare for me to find, in any age bracket, a series that can carry on this long and still retain all the freshness and vigor found in it's early titles. This really is a bit of a publishing prodigy, in that it not only widens the range of involvemt in the stoy - with the 4 sets of card packs (2 out previously, one coming very soon, and the fourth releasing with book 9), but also the website and the huge amount of history, cryptography, puzzle solving and clue hunting included with every book... but it also keeps a fresh and active plot - no doubt hugely helped by having multiple authors who collaborate so well.

This title is another great installment, taking us ever deeper into the hidden world of the 5 Cahill branches (Yes... I said 5) and eventually revealing the biggest surprise to the reader, and system-shock to the lead protagonists - Dan and Amy - one could imagine: their true branch affiliation. Having been told, and learned for themselves, never to trust anyone... can they now trust themselves to remain true?

With all the action in each and every book, it is hard to imagine how much more poor Dan and Amy, as well as their every-frustrated and frustrating carer, Nellie, can cope with without bursting out, screaming defiance, and heading for an unsatisfying, but at least relatively safe, life back home with their bitter, domineering Aunt.

Overall, as expected, and hoped... another great installment that takes the young reader on a wild journey around the world, and through time - with more than a few sidetracks into danger, peril, and dusty libraries - and in the process captures their interest in various aspects of history and the people that made it. Educational, but covered in a thick candy-coating of thrilling fun and adventure.

It's time to hit the accelerator! Drive into the world of Hot Wheels and get the inside story on the fastest, wildest and craziest cars. Each section features facts and stats on four types of cars - from city racers and souped-up workshop cars to the ultimate off-road vehicles. Discover a whole new world of Hot Wheels cars!