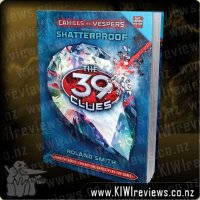 Thirteen-year-old Dan Cahill and his older sister, Amym have committed a string of thefts that lands them on Interpol's Most Wanted list.

But the crimes are not Amy and Dan's fault. A shadowy organisation knowns as the Vespers has kidnapped seven members of the Cahill family. If Amy and Dan don't deliver a series of bizarre ransoms, it's lights out for the hostages.

Until now, Amy and Dan have stayed one step ahead of the police and managed to keep their family safe. But all that's about to change. Vesper One commands them to steal the Golden Jubilee, one of the world's largest diamonds. What Amy and Dan don't know is that the Jubilee is a setup... and someone is going to die.

This book was very complex and the plot was like a puzzle; it didn't fit together until you finished the book. However I think that this makes it a more entertaining read. I like the way that codes are often hidden in the book covers and that there are secret messages throughout the entire series. This book sheds light on some of the more mysterious bits of the previous books. Now Vesper one demands the biggest diamond in the world; The Golden Jubilee. Amy and Dan do not know that this is a setup, and a hostage will die. This book reveals some of the mysteries in the past books; the De Virga compass rose for example. The cover looks great but I can't solve the code.

The cards in this series are cool but I haven't got to do the unlocked mission yet.But I can almost guarantee that it is awesome if it is anything like the other missions on the site.I like the way that this book is the turning point for the hostages and is full of excitement. I read this non-stop for hours before I started this review. I will definitely be reading it often. Overall, great value, great book and I highly recommend to all.

Well, this book was certainly interesting, the storyline had parts that at first didn't make sense, but I understood them as I went further into the story. Despite that, I think that this is still an awesome book. The main thing I love about the story is that it has shone some light on the mysterious "Compass Rose" that was mentioned near the end of book 2, A King's Ransom, it was a symbol shown on the De Virga map which was the item that Amy and Dan had to steal.

The cover design was great, I loved the picture of the diamond, and I can say for certain that I'm glad I wasn't the one who had to paint it in Photoshop, it looks very complex! The code on the front cover, however, is one that I cannot decipher, it is now just an Enigma that is nagging at the back of my mind! The story itself was awesome, it kept me full of excitement, and at almost every mealtime I had during the period in which I still had to finish the book, I sat down with it and read while I ate, so I will have to read the book again at some stage, I don't know when, but I will.

The price is great, it matches the value of the book well, and the mission that was unlocked when I added the cards was also cool, and now I know that there is a vesper traitor among the Cahills... Anyway, my overall opinion is: great book, awesome story, fun mission, good price. Enjoy.

The fourth episode in the "Cahills vs Vespers" series, this story takes a bit of a new twist. While the previous titles have always ended well, this one takes a bit of a darker turn, adding a new, rougher edge to the story. Whether this now puts it into a new demographic - an older, more pre-teen audience - will be a subjective decision, however it's still suitable for my 12yr old.

With the amount of historical information crammed into these titles, it's always impressive to see new information being brought into the conspiracy in such a plausible way. Famous icons, paintings, locations and people are all woven into a very realistic plot that spans centuries and the globe. Such excellent work almost feels wasted in a kids series - why it isn't on the big screen or as a TV series yet still surprises me.

Overall, because this is another part in an ongoing series, I don't want to give too mjch of the plot away in this review. If you are familiar with the series you'll know how good they are. Though I haven't heard of Roland Smith prior to this title, if this is the calibre of his work, I will ensure on my next visit, I look for his name on the library shelves!