Songs of the Dying Earth review 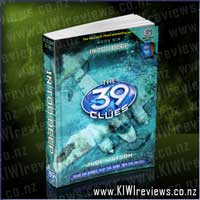 Disclosure StatementFULL DISCLOSURE: A number of units of this product have, at some time, been supplied to KIWIreviews by Scholastic (NZ) or their agents for the purposes of unbiased, independent reviews. No fee was accepted by KIWIreviews or the reviewers themselves - these are genuine, unpaid consumer reviews.
Available:
November 2009

Haunted by the ghosts of their past, chased by deadly competitors, Dan and Amy can't see who is an enemy and who is a friend. Their blindness leads to a terrible mistake... and the death of a hidden ally.

Once again I have to spend a few minutes reading this book. It doesn't help that I'm a fast reader - I would like to see the books a little longer to give me a bit more time to kill getting stuck into the plot and the story; however, since these books are aimed at the younger generation I really can't complain too much.

They are fun books (yes, all of them) and I have read them all more than once - and book six is no exception. It is absolutely rivetting from start to finish - leaving me feeling a little frustrated that I still have a few more books to read before I can finally find out what happens in the end - but that is the price one pays with these books.

It's not just about the story but solving the clues as you go: collecting cards and visiting the website before finally putting all the clues together and hopefully finding the prize.

We currently find the Cahills with their Nanny in Australia meeting up with their father's cousin and we find out more about Amy and Dan's past; however I still cannot wait until the next books (yes, bookSSS) to find out how the story concludes and we finally have all the pieces to the puzzle.

The book follows on seemlessly from the previous versions and I can only imagine a huge amount of planning took place by the publishers and authors to collaborate on a project such as this, and to all involved it has been a mammoth effort and all praise is richly deserved. I cannot help but give it yet another perfect 10!

Once again another great book in the 39 clues saga and once again, it almost seems like more questions are asked than answers given. I firmly feel that as the series goes the writing and the atmosphere is getting better and more intense. My eldest son absolutely loves these books and I can once again see that this one will be read over and over again like the other 5 books. When I asked him why he likes the books so much, all he said was he likes the adventure, and then preceded to ask me to read him another chapter of the book before bed.

This time Amy and Dan are in the great land downunder (no not New Zealand, but that big dry lake bed next door to us

), this time a few more clues are given about Amy and Dan's past, we also get introduced to Shep their fathers cousin, and once again a few surprises are also in store

I have read all of the 39 Clues books so far and loved every one of them; this one was no exception. It is a fast and easy read with tension mounting and mysteries slowly beginning to come together. I like that we are beginning to see parts of the story from other characters points of view - Irina, Natalie, Nellie... This series has obviously been very well planned and each new author brings their own brilliance while somehow managing to keep the continuity.

I have never been one for solving puzzles, I care more about the unfolding story, but there is enough of both to interest children (and adults) of all persuasions. I enjoy collecting the cards and adding them to the website and I especially like the new feature they have introduced which allows you to design and print out your own agent card! Very cool.

Can't wait to read the next installment in February next year!

In this book Amy and Dan Cahill head to Australia looking for a lost Tomas clue, and along the way they find more evidence that most of world history was based on the Cahill family, but the hunt also brings Amy lost memories that she can't even tell Dan. Will the hunt change them as well as their lives? I loved the cover of the book because it's like a window into the watery depths of the ocean, and the plane wreck makes it extra special because it looks a hundred years old and I like ancient-looking stuff. The story was fun because it had lots of action in it and it made me want to read it again and again. One thing that disappointed me was that the clue card's clue key symbol and book title made the book clue obvious, and the secret message in the cover is difficult to decode. In the back of the book it says that book 7 will answer the unanswered question that even Amy and Dan wanted to know: what branch are Dan and Amy in; so I can't wait to read it. I am looking forward to seeing how the hunt continues, and what branch Amy and Dan are from, so good luck to all those who accepted the challenge, the game is on.

Continuing this epic saga of discovery, betrayal, revelation and personal growth, we once again join Amy and Dan as they drag their suffering companion Nelly around the globe in search of the 39 Clues. But, are they *really* dragging Nelly around? There are more than Clue puzzles to solve now, it seems.

Allies come out of the woodwork, good deeds and trust are repaid in kind, another hidden player is starting to draw out into the open, enemies reveal their true colours both good and bad, and truths from the past come back to haunt the children... it all seems too much for the kids and they very nearly give in to their grief and exhaustion... but the fate of the world is at stake. Besides, they know Grace wants them to fight on... and win.

Taking place in and around Australia, this title is the 6th in the series of 10, and the second book authored by Jude Watson. Once again, she has managed to keep the 'feeling and vibe' of the characters consistent along with the other four authors, and this helps to keep the storyline flowing smoothly.

Overall, another great title. My only gripe is more to do with my own inabilities: Each book in the series contains puzzles to decode... usually hidden throughout the book in or around the page numbers... and usually the decryption key is inside the front cover... this one appears to have another puzzle to solve there instead... and I can't solve it! -gah!- The hunt is getting harder as it nears it's finish... and not just for Dan and Amy.

An egg in the garden. An egg on the path.
An egg in a shoe. An egg in the bath.
"Cluck, cluck! Wonderful me!
Cackle, cackle! My eggs are free!"

Young Nelson despairs that his hen won't lay her eggs in his henhouse, so decides to lock her in until she lays in the nest. But Omeletta is a stubborn creature and refuses to lay any eggs at all until she is freed. Children will laugh out loud at the hilarious antics of ... more...