I Survived: The Nazi Invasion review 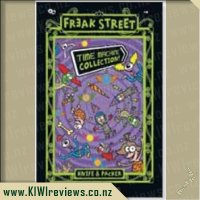 Disclosure StatementFULL DISCLOSURE: A number of units of this product have, at some time, been supplied to KIWIreviews by Scholastic (NZ) or their agents for the purposes of unbiased, independent reviews. No fee was accepted by KIWIreviews or the reviewers themselves - these are genuine, unpaid consumer reviews.
Available:
July 2014

Your favourite Freak Street families are travelling through time.

•  The Aliensons have a Time Hopper which is flying them hundreds of years into the future.
•  Zlobba has unleashed an ancient Egyptian curse, sending the Zombiesons back in time to the pyramids.
•  A Wash'n'Clean Machine malfunction catapults the Humansons into prehistoric times.
•  The Wizardsons are on a journey to medieval times to fetch a new magic staff.

Join them on their freaky adventures as they meet four new families.

When my daughter was younger we read and reviewed the Freak Street collection of books introducing the four main families of Freak Street, Meet the Humansons, Meet the Zombiesons, Meet the Aliensons, and meet the Wizardsons. My daughter about 9 at the time really enjoyed these books and had a lot of fun reading them. When she seen this over my shoulder up for review she asked me if we could request it, so I did. She is now 12 so a bit old for this style of book but she enjoyed it all the same!!

Well she read the book first finishing the whole four stories in one night, as it is quite easy reading with a page of large printed story and then a page or two of comic strip style writing you do get through it quite quickly. Although the book looks huge and heavy at first sight the pages are quite thick and glossy and a lot of the book is taken up with pictures so it is quite light reading for the able reader. I would say quite suitable for an 8 year old reader to tackle as despite the odd word here and there it is all simple and straightforward language used.

The stories in this collection are yet again hillarious. Knife and Packer do a great job of keeping the stories with a funny twist, perfect for young boys and girls. We first find out how the Aliensons end up catapulting themselves 100 years into the future when their time hopper machine goes wrong. They meet a new family the Robotsons as in the future everyone is a robot so they work with the Robotsons to get their time hopper fixed so they can go back to their own time on Freak Street. Lots of twists and turns keep you entertained as you read this story.

We next travel back in time with the Zompiesons to ancient Egypt where we again meet a new Freak Street family the Mummiesons, and more with the Humansons traveling back in time to Prehistoric times with a washing machine malfunction and the Wizardsons travelling back to medieval times. Lots of new families to meet and twists and turns as we see how the families make their way back through time through many entertaining and humorous adventures. Lots of things to keep you giggling as you read.

At the back of the book is a single page on which you can design your own cover page for your own Freak Street Family which is quite cool and would get kids being creative thinking up a crazy family of their own to make up a time travelling story about. I thought this was a nice touch and it is quite good to see a book with an interactive twist to keep kids hooked on reading.

We are going to gift the book to my younger nephew who is not a fan of reading as I think books like these are good for young boys who are not particularly fond of picking up a book to read as they have the comic strips and lots of pictures to break up the words.

A riveting tale of piracy and slavery set in the early 1600s in Ireland and Northern Africa.

Twenty-five years ago, young Liam's small fishing village on the Irish Coast was raided and its population decimated by brutal corsair pirates from the Barbary Coast who killed, plundered, and took a number of his people back to Northern Africa as slaves to Muslim masters.

And now a pirate ship has been wrecked in Liam's bay, and survivors are struggling ashore