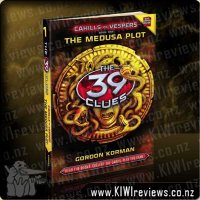 Disclosure StatementFULL DISCLOSURE: A number of units of this product have, at some time, been supplied to KIWIreviews by Scholastic (NZ) or their agents for the purposes of unbiased, independent reviews. No fee was accepted by KIWIreviews or the reviewers themselves - these are genuine, unpaid consumer reviews.
Available:
August 2011

The 39 Clues - Cahills vs Vespers 1: The Medusa Plot product reviews

Thirteen year old Dan Cahill and his older sister, Amy, thought they belonged to the world's most powerful family. They thought their hunt for the 39 Clues leading to the source of that power was over. They even thought they'd won. But Amy and Dan were wrong.

One by one, distress calls start coming in from around the globe. Cahills are being kidnapped by a shadowy group known only as the Vespers. Now Amy and Dan have just days to fulfil a bizarre ransom request or their captured friends will start dying.

Amy and Dan don't know what the Vespers want or how to stop them. Only one thing is clear - the Vespers are playing to win, and if they get their hands on the Clues... the world will be their next hostage.

I have loved the first series of the 39 Clues and I didn't even know that this series existed. This new series which is devised by the best authors of this day goes straight from where the first left off. In this series Amy and Dan have had 7 of their fellow Cahills kidnapped by Cahill families arch enemies; The Vespers. If they are to ever see their cousins alive, well and (most importantly free) ever again they have to do a series of dastardly deeds involving the theft of the precious Caravaggio "Medusa".

What is fun about the first series is the way people were classed the same as their branch of their family (smart Ekats etc) but as the series grew you got to know the characters individually and got to see past the stereo-types about the Cahill branches. Now in this series the younger Cahill cousins leave their fighting behind them to join their talents to fight the Vespers and to rescue the hostages. All the favorite characters in the last series are back and there is always a mystery to keep me entertained. In this book you learn about history without even meaning to. Before reading this book I had no idea what a Caravaggio was, who were the Mud Angels, and that there was even a piece of art called the "Medusa". In my opinion these features combine into a near perfect book very much recommended to adults and children alike.

Pack all this together and then you'd think that there wasn't much else you could improve but the 39 clues series has even more to offer. An interactive version of the clue hunt. Each book has a random pack of 6 cards which unlock missions playable through an account at www.the39clues.com

you can also buy packs of cards to unlock even more stuff on the 39 clues site.

This book is an awesome start to what will surely be a successful series. I can't wait to start reading the rest of the series.

Having thoroughly enjoyed the first series, I was excited to discover that this second series existed. Leading pretty much straight on from where I left off (minus a small adventure with the Vespers in some sort of bridging book I seemed to have missed), Amy and Dan are thrust into yet another difficult situation as the evil Vespers kidnap their friends and force them to carry out certain crimes if they ever want to see them alive again.

One of the things I loved in the original series was the way characters started out as complete stereotypes (the cunning Lucians, the strong Tomas, smart Ekats etc) and gradually, as you got to know them, they grew and became more complex. Now that their infighting is (mostly) behind them, it's fun to see the young Cahills banding together to fight a much bigger external threat. All of my favourite characters from the last series are back and there's mystery and adventure a-plenty to keep me entertained.

Another thing I loved in the original was the way you got to learn about history without even meaning to. This time, we are on the trail of some famous (and somewhat more obscure) artists in Italy. While never intruding on the pace of the story, I enjoyed discovering places and paintings I'd never heard of and losing myself (along with Amy and Dan) in the catacombs beneath Rome.

All in all, an amazing start to what promises to be an even more exciting series (if that's possible). Can't wait to get stuck into book 2!

For once I am actually giving a kids book top marks. I'm not sure how to put my finger on it but there is something about this book that was completely absorbing and has left me darn near gagging for the next one!

We follow two young people, Amy and Dan, part of the worlds most powerful family. Since they were initially introduced in the first series, titled The 39 Clues, my only stumbling block was that I haven't read that series so I did have to figure out some of the back story, that wasn't too difficult though.

It isn't far into the story when Amy and Dan find family members have been kidnapped and they have been contacted by the mysterious Vespers and thrown into completing what turns out to be just the first task to try to get their family released.

The book is well written, fast paced and totally absorbing. The characters are likeable and lets face it, who wouldn't think being a super rich secret agent from a powerful family is kinda cool!

It also comes with a series of 6 cards. Once signed up to the 'The 39 Clues' website, you can enter the code from these cards and play online missions. These start out with training and move onto missions to help the Cahills try to defeat the Vespers. You can even build a whole online "Secret Agent Identity". This is definitely one to appeal to the kids (ok and big kids - psssst I'm ChurchCat3 if you need me) and a great way for kids to be even more engaged with the story. From a parental point of view I also love the educational element, getting kids to really use their brains to solve problems.

from me and hopefully I can get my mitts on the rest!

After the superb bridging book of the old series into this the new series, this one keeps the high tempo going as well as the thrills and excitement that we have come to expect from this series.

Once again Amy and Dan must use their wits and their 'thinking outside the box' attitude to try and come up with a way to raise the money for the ransom being asked for their 7 kidnapped relatives. As in the pervious 39 Clues books it appears that Amy and Dan will once again be spending a great deal of time travelling the world, this time they went to Rome, Italy, home of the once great and powerful Roman empire.

Also as with the previous series there are cards to collect which when used with the online website will allow for a more immersive experience to reading the books for the audience that this series of books is squarely aimed at.

This promises to be an exciting new series and my son can't wait to read more adventures of the Cahills.

Okay, first item today: THIS BOOK ROCKS!! As soon as I laid eyes upon it, I was busting to read it; if I didn't already have another book to review, I would have grabbed this one, gone into my room, shut the door and read to my heart's content. It took me a bit to spot the code hidden on the cover, and it was cheeky how the key was put on the page which said that this book was "published by Scholastic" blah, blah, blah, but I give a big round of applause to the author for hiding the code so cleverly.

The storyline flowed well, it was great how it started with seven of the Cahills were being kidnapped at exactly the same moment in different places all over the world, and it really gave an explosive beginning. It was interesting to read about how Amy and Dan used their creative minds to try and steal a famous painting of the ancient Greek monster, Medusa, in order to pay off a ransom in exchange for their kidnapped family members; the BEST part was when they went to the Roman Colosseum, Rome has always been of great interest to me.

The cards were cool, I enjoyed attempting to crack the codes on some of them, and they are a good, productive activity to go along with an exciting new book. I would say that "The Medusa Plot" would be good for kids over ten years of age, because there are some parts which involved people getting shot, and I don't think a 5-year-old would enjoy that. The online mission was fun, it was a shame that it was so short, unlike the "Marco Polo Heist" unlocked by the cards in the card pack. One of the activities that the mission contained was rather hard, I had to pass it and call for backup to finish it for me; but, now that I think about it, the "Backup" button was actually quite useful! I am certain you will find this book very good, for it is a really good read.

As time runs out on another innocent victim's life, ... more...