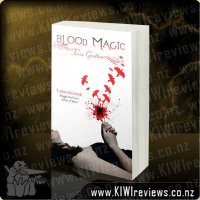 Disclosure StatementFULL DISCLOSURE: A number of units of this product have, at some time, been supplied to KIWIreviews by Penguin Random House or their agents for the purposes of unbiased, independent reviews. No fee was accepted by KIWIreviews or the reviewers themselves - these are genuine, unpaid consumer reviews.
Available:
July 2011

The murder of her parents has left Silla damaged and lost, and Silla's insistence that her father is not to blame only alienates her further from her friends and family. When a mysterious spell book arrives, Silla hopes it will lead to some answers about her parents' killer.

In her first attempt at magic, in an old graveyard near her home, Nick, the new boy in town spies on her; he recognizes the magic that Silla is performing as the same magic his mother performed with him, before she went mad. Before long, Silla and Nick connect, though Nick is unwilling to share his history with blood magic with Silla.

When Silla's friends start showing signs of possession, Silla, Nick and Silla's brother, Reese, must contend with a deadly, immortal woman who will stop at nothing to take the book of spells from them.

This book is written from three different point of views, making it very difficult to read especially considering one of the points of view remains anonymous until midway throughout the novel.

Silla has just lost both of her parents in a murder/suicide, according to hearsay anyway (her father shooting her mother and then killing himself). Silla refuses to believe this and insists upon her fathers innocence. When a spell book is sent to her, she learns her father is keeping secrets about magic- blood magic, this is related to his and his wife's death. Silla and Nick, a boy who has just moved to town, learn blood magic together even though Nick is no stranger to blood magic, which is why he connects with Silla and both of them end up facing huge problems and challenges together.

Although I didn't like the alternating point of views and when i began reading the book I didn't expect to like it as it seemed a bit unbelievable and fairytale'ish. I actually ended up enjoying this story, Finishing it all in one day actually. It had just the right amount of romance and chemistry combined with magic and gore. Would definitely recommend this one!! Great for the teenagers who read the Vampire/Werewolf stories.

Eggs have hatched in Terradon but it is a not a rock beast. The ice is melting in Isolus and it is raining in Tornados. There are dust storms in Tornados and water is invading Sludgia.

Will Kai be able to battle the new mutants with his new combo gear? Will he learn how to stop more mutants coming?