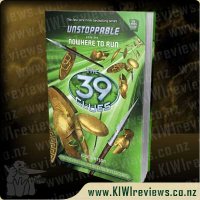 Disclosure StatementFULL DISCLOSURE: A number of units of this product have, at some time, been supplied to KIWIreviews by Scholastic (NZ) or their agents for the purposes of unbiased, independent reviews. No fee was accepted by KIWIreviews or the reviewers themselves - these are genuine, unpaid consumer reviews.
Available:

The Cahill family has a secret. For five hundred years, they have guarded the 39 Clues - thirty-nine ingredients in a serum that transforms whomever takes it into the most powerful person on earth. If the serum got into the wrong hands, the disaster would rock the world. So certain Cahills have always made it their mission to keep the serum safe, buried, locked away. Until now.

Thirteen-year-old Dan Cahill and his older sister, Amy, are the latest guardians of the Clues. They think they've done everything right, but a tiny mistake leads to catastrophe. The serum is missing and Dan and Amy have to get it back and stop who stole it ...before it's game over. For everyone.

The first of the new 39 Clues' new series is an exceptional book! I was very excited when this series came out but I had no clue what it was going to be about. The cover doesn't really tell what the story is going to be about but it still looked really nice. The introduction was really mysterious and made me wonder what was going on in the story. What I noticed in the first bit of the book was that the storyline and the book's contents were very dark and dangerous very early on. The book also continues on from the previous series quite smoothly.

This book is longer than most of the other ones are and is probably the best 39 Clues book that there has been yet. I hope that the other books in the series are as good or better than this book. This books is packed with action and the danger and excitement starts very early in this book. About the only part of the this series that I don't like is that there are only 3 books! I don't know how the whole series will be able to be finished in 3 books but I am dying to read the other 2 books. I think that the other books will be filled with action as well.

Another thing I liked about this book is that there is a lot of mysteries that need to be solved in this book, I like these puzzles because it makes more excitement for the story. There are new characters in this book, ones that make this book really interesting. What I wonder now is what is going to happen in the rest of the books and how everything is going to turn out. I have already read this book 3 times and I can't wait for more!

It took a while for me to get my hands on the first book of this new series, but it was worth the wait! Since the first series was the hunt for the 39 serum ingredients, and the second series was the endgame of the Cahill's dark and hidden enemies, the Vespers, so I thought, "What could this series possibly be about?". I think that the plot for this book is quite cool, although, as the 39 clues story goes on, it keeps getting less and less realistic, but the authors still manage to keep the story-lines exciting.

I noticed that the main characters, like Jonah Wizard and Ian Kabra, were mentioned less often than they were in the last two series, so the storyline was a bit darker than usual. The online mission was rather cool, I loved how the introductions to each stage of the mission were done in a chat-room-like format, it made it a lot cooler. My favourite thing about this book was the fact that there were some good mysteries in this book, and I loved seeing them get solved, as these mysteries held an element of surprise that kept me excited.

The price is good, I think that the book's value is a good match for this price, so that aspect gets a full 10/10. The story was easy to visualize, it's one of the telling properties of a book, how well the mind can interpret it and translate it into images, so this book was high on that score. I found this book fun to read, and it was highly entertaining, can't wait for book 2! I think that I will read this book again sometime, as it would be worth the time!

Emma Watson, a brilliant research physician, has been training for the mission of a lifetime: to study living organisms in the microgravity of space. But the true and lethal nature of this experiment has not been revealed to NASA, and once aboard the space station things start to go terribly wrong.

A culture of single-celled Archaeons, gathered from the deep sea, begins to rapidly multiply and infect the crew - with agonizing and ... more...