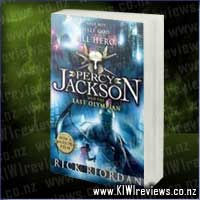 Most people get presents on their sixteenth birthday. I get a prophecy that could save or destroy the world. That's how it is when you're the son of Poseidon, God of the Sea.

According to an ancient prophecy, bad things will happen when I turn sixteen - because I'm the one who gets to decide the fate of the entire world. But no pressure.

This is the one where Kronos, Lord of the Titans, is beginning his attack on New York City, where Mount Olympus stands virtually unguarded.

Oh, and the dreaded (and not to mention enormous) monster Typhon is also heading our way. So it's me and forty of my demigod friends versus untold evil...

The final chapter in the Percy Jackson series, 'The Last Olympian' had a lot of loose ends to tie up and to it's credit, it managed to do so without too much fuss and bother. By the time I finally got to read this, it had been some time since I read the previous book and I had forgotten some of the story. I didn't remember, for example, who Rachel was, or why there would be even the slightest hint of a love triangle between her, Percy and Annabeth. In fact, I found that aspect of the final story rather forced, since it wasn't really the focus. I got to the end of the story and thought, 'Mmm... that was that then.'

Don't get me wrong, I do like this series. Rick Riordan's writing always makes me smile ,simply because of the cavalier and witty wording. Yet maybe that is the problem, such a style is hard to maintain when you are up to the final book and trying to make people care that the world is in imminent danger, yet we are still being incredibly off-hand about it all.

While this book certainly cannot compete with the poignancy of Harry Potter and the Deathly Hallows or Lord of the Rings - Return of the King, it is a decent ending to what was, overall, a rather fun 'laugh-aloud' series.