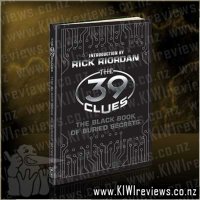 The 39 Clues - The Black Book of Buried Secrets product reviews

For the past five hundred years, the Cahills have silently dominated the world. Their desperate hunt for the 39 Clues lies behind some of history's biggest enigmas - the curse of the Hope diamond, the race to summit Mt. Everest, the wild life and death of Harry Houdini. And now - finally - the secrets are out. With an introduction by Rick Riordan, "The 39 Clues: The Black Book of Buried Secrets" reveals the shocking truth about history's most notorious family.

Full of lush color, "The 39 Clues: The Black Book of Buried Secrets" lays bare each hidden fact, concealed strategy, top agent, lost founder, secret base and hushed-up scandal of the Clue hunt. This complete guide to the Cahills contains information on all five branches, including the notoriously elusive Madrigals. The must-know information includes:
- Full files on the enigmatic Man in Black.
- The true purpose of the Madrigal branch.
- The complete story of the fire that split the original Cahill family.
- The truth about the night Hope and Arthur Cahill died.
- Open access to the secrets of the Lucian, Ekaterina, Tomas and Janus branches.

It's never too late to join the hunt - especially with "The 39 Clues: The Black Book of Buried Secrets" to provide complete access to the Cahill's most deeply-buried secrets.

Packed full of 'top secret' information from all five branches of the Cahill clan, this book is a treasure-trove for clue hunters needing to brush up on the background information from the other four branches, while preparing to join the whole family in facing down the threat of the Vespers.

There are dossiers, profiles, excerpts, hints and secret files from every branch, giving the avid clue hunter all the catch-up they need to become part of the growing army of Cahills ready to defend their family against the pure malice that is the Vesper organisation. For more details, you should read the bridge book - Vespers Rising, available now.

Overall, though this doesn't add anything new to the clue hunt, which is now over anyway, this is still a fun addition that any kid who enjoyed the hunt will love to pour over during some quiet reading time.

This is probably one of the best "39 Clues" books you will find on the shelves, it holds secret from all the Cahill family branches, including the highly feared Madrigals. From the Cahill founders and branch hot spots to top agents and gadgets, "The Black Book of Buried Secrets" is a book you can't afford to miss.

The cover was okay, but it wasn't as cool as the other "39 Clues" books due to the fact that they had more colour and interesting features. I think that the introduction is my favourite part because it seemed real; in fact it seemed so real that I actually believed that the 7 authors who made the series were really Cahill agents, and that being book-writers for Scholastic was just a cover story.

I liked the Founder Archives and Agent Updates for the fact that they told what happened to founders before the "official" clue hunt and what happened to well-known agents after the clue hunt. I liked the codes scattered throughout the book because they are rather cool, and I'm still trying to decode some of them!

I would recommend this book for people 10+ since adults can join the hunt for the clues as well as kids. "The Black Book of Buried Secrets" kicks some other book's butts with a 10-tonne force, so get yourself a copy today, and remember; guard these secrets with your life. Good luck!

In charge of an old cargo spaceship, the Old Captain Orbus flees a violent and sadistic past, but he doesn't know that the lethal war drone, Sniper, is a stowaway, and that the past is rapidly catching up with him. His old enemy the Prador Vrell, mutated by the Spatterjay virus into something powerful and dangerous, has seized control of a Prador dreadnought, murdering its crew, and is now seeking to exact vengeance on those who tried to have ... more...