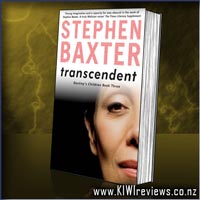 Disclosure StatementFULL DISCLOSURE: A number of units of this product have, at some time, been supplied to KIWIreviews by Allen & Unwin or their agents for the purposes of unbiased, independent reviews. No fee was accepted by KIWIreviews or the reviewers themselves - these are genuine, unpaid consumer reviews.
Available:
December 2005

As the world struggles through the middle years of the 21st century; global warming, the end of oil, Michael Poole is being haunted. By the far future. Or a far future at least.

But a future tortured by regret. A very human regret. A regret that has to be resolved before they can achieve godhood.

A future that must fold down into the present.

And in that far future a young woman begins an epic journey, across the countless human worlds where mankind has evolved into countless different forms, towards the Transcendence and a different way of being.

Though an absolutely STUNNING conclusion to the trilogy, this novel is again the victim of massive temporal dislocation syndrome... in laymans terms, each chapter is set at one end or the other of a 500,000 year gap in time.

However, this is a necessary evil, and not as distracting as the first book was, since a form of time bridge is kept throughout the storyline, with time-jaunts, the explanation of the Kuiper Anomaly's arrival, and sudden departure, and purpose too, and the ever-present Witnessing Tank that the lead future-zone character uses with extreme frequency to spy on the past. This not only explains a lot of things from the first 2 books, but also stops the story from seeming so fractured and distant.

Though I still fancy book 2 the best, this book is not only awesome, but necessary, to tie the whole story together across a vast expanse of time. The sheer scope of the story is audacious, and only a master author like Stephen Baxter could pull it off with such a smooth series of plot shifts, not only across time and space, but also across possiblity-timelines and cultures whose spectrum is almost as vast as the time-shifting itself.

Though it is a huge tome, weighty in it's mass as well as impact, it was quite easy to get utterly lost in, blowing away a stunning 4-hour reading session in what felt a mere 25 minutes. I was astounded when I put it down and realised there wasn't a dink in the spine caused by my bookmark, for well over 280 pages!

Overall, each book in the series has it's own appealing features and drawbacks, along with a completely different style inbook 2, but the series as a whole is a masterpiece, verging on the scope and fame of Isaac Asimov's "Foundation Trilogy". If you really enjoy setting down roots and digging in to a good book or three, you really ought to have found Baxter by now. If not, but if you like Greg Egan, Greg Bear or Peter F. Hamilton, then you will find Baxter's work right in tune with your literary pleasures.

Score: 9.8
Product reviews for listing 6356: I'll Be there
Written by: Holly Goldberg Sloan

Emily believes in destiny. She's waiting for the moment her real life begins.

Sam wishes he could escape. He's spent his life being dragged from place to place by his father. But he could never abandon his little brother.

Then everything changes when Sam meets Emily.