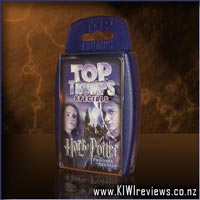 Disclosure StatementFULL DISCLOSURE: A number of units of this product have, at some time, been supplied to KIWIreviews by the company for the purposes of unbiased, independent reviews. No fee was accepted by KIWIreviews or the reviewers themselves - these are genuine, unpaid consumer reviews.
Available:
At Quality Stationary and Games outlets

In this latest addition to the Top Trumps Specials range, Harry and his friends (and those he is not so friendly with!) are rated on categories including 'Magic', 'Cunning', 'Courage', 'Wisdom' and 'Temper'. Two or more players can play. Players deal the cards amongst themselves and one player will read out a fact from their top card - the other players must openly compare the same fact. Whoever has the highest fact, wins the opponents cards. The winner will be the person who has all the cards at the end.

For that extra special game, this pack can be joined with Harry Potter & The Goblet of Fire... extra magical !!

As an adult I have to say, my attention span for this game lastest about 10 minutes. Lucky this game isn't aimed at me - my ten year old son on the other hand... lets just say I will be playing that game for quite some time.
He loved it! He thoroughly enjoyed learning about the Harry Potter characters a bit more, and the pictures were fabulously done. Unlike a lot of games these days it was nice and simple to play, and given the subject matter it was easy for him to stay focused on playing.

This Top Trump release tied in nicely to the Harry Potter and the Prisoner of Azkaban film that was released a while ago.

Richly illustrated with still images of the film and accompanied by short notes on each card, one learns a little more about each character: their strengths, weaknesses and where their talents lie. The dark pack and case makes a nice brooding feel consistent with the imagery and the feel of the film.

The Harry Potter and the Prisoner of Azkaban deck makes a nice gift for the Harry Potter fan and is so beautiful, it is worthy of a place in anyone's collection. Having said that, I'm not sure which Harry Potter pack rates more highly in my daughter's eyes and I have a feeling that both will be combined and played together before too long.

Beautiful, magical and hours of fun!

It's fun and it has some spooky and some funny pictures.
It's cool when the cards tell you a little bit about the people and the story. The cards are beautiful and I like them very much.

My friends would really like to play with them and I wish my class had Top Trumps.

One of my favourite Harry Potter movies, it was really good to get the Prizoner of Azkaban deck and have a play. Stacked with all the characters, even quite a few of the background ones who become important in later stories, there are plenty of possible Duels you could imagine with these cards.

What if a Dementor had a face-off with Harry's Uncle Vernon, battling with Tempers... or what about with Wisdom? Do you know who'd win? You might be surprised. Who would win if Hagrid and Aunt Marge squared toes across the arena? And who's more pathetic, Peter Pettigrew or Dudley Dursley? I think I had more fun dreaming up possible scenes and sub-plots afterwards, than I did actually playing the game.

Overall, this is certainly one of my favourite decks, with spectacular artwork, the only let down was the font chosen for the character's names. Written down the top-left edge of the cards, in a somewhat overly-ornamental style, I think it is a pretty major slip in design. Shame really, but once you get to know the faces, the game flows smoothly along. Give it a chance, and remember it can be merged with the Goblet of Fire deck for extra fun or players.

A lot of fun, this deck is certinly a great one to attract the kids attention. Playing along well, riding the Harry Potter merchandising wake perfectly, this deck is great. hearing that this deck can be combined with the other HP deck(s) to make the game bigger or more challenging. I can imagine a lot of drawn hands if there are too many overlapping characters.
This was a great deck for anyone who enjoyed the movies. I am just surprised there isn't more movie spin-off decks. How about some Lord of the Rings decks? Either way, lots of fun, and some great artwork to really set it off. Nice.

Score: 8.8
Product reviews for listing 8806: Who Did It?
Developed by Blue Orange

Was it YOUR dog that pooped in the living room? Because it wasn't my bunny! In this hilarious card game, race to be the first to get rid of all your cards, avoiding the blame of owning the animal that pooped. Each game is as funny as it is fast; quickly find your card, be the first to throw it down, and then blame someone else!