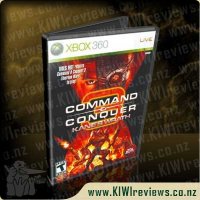 An expansion pack to C&C3, Kane's Wrath returns to the Tiberium universe with Kane at the center of an epic new single player campaign. The expansion allows players to experience a new story that spans 20 years - from the rebirth of the Brotherhood of Nod after the Second Tiberium War through the dramatic events of the Third Tiberium War and beyond. The story is told through a new set of high-definition live action video sequences starring a celebrity cast.

Command & Conquer 3: Kane's Wrath also features a new strategic layer to gameplay that allows players to establish bases, build customized armies, and attack their enemies on a global scale - and then dive into the frenzied tactical combat where their skills as a commander will make the difference in battle. The game introduces six new sub-factions and a wealth of new units, structures, and powers to the armies of the Global Defence Initiative, the Brotherhood of Nod, and the enigmatic alien Scrin.

In this game, events are taking place between previous games in the series, giving answers to some questions but also can cause some confusion if you haven't played these games before. For someone like me, playing this game was a bit confusing at times, but for those who have played games in this series it's a nice addition and gameplay is easy to pick up.

This isn't the best in the series, but if you have played others in the Command and Conquer series then you should at least give this a go.

Dead Space 3 brings Isaac Clarke and merciless soldier John Carver on a journey across space to discover the source of the Necromorph outbreak. Crash-landed on the frozen planet of Tau Volantis, Isaac must comb the harsh environment for raw materials and scavenged parts. He will then put his engineering skills to the ultimate test to create and ... more...