ProdID: 5220 - Harry Potter: 5: The Order of the Phoenix
Directed by David Yates 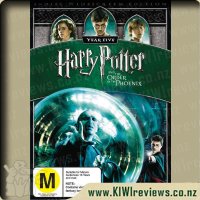 Harry Potter: 5: The Order of the Phoenix product reviews

Harry returns for his fifth year of study at Hogwarts and discovers that much of the wizarding community has been denied the truth about his recent encounter with the evil Lord Voldemort. Fearing that Hogwarts' venerable Headmaster, Albus Dumbledore, is lying about Voldemort's return in order to undermine his power and take his job, the Minister for Magic, Cornelius Fudge, appoints a new Defense Against the Dark Arts teacher to keep watch over Dumbledore and the Hogwarts students.

But Professor Dolores Umbridge's Ministry-approved course of defensive magic leaves the young wizards woefully unprepared to defend themselves against the dark forces threatening them and the entire wizarding community, so at the prompting of his friends Hermione and Ron, Harry takes matters into his own hands. Meeting secretly with a small group of students who name themselves "Dumbledore's Army," Harry teaches them how to defend themselves against the Dark Arts, preparing the courageous young wizards for the extraordinary battle that lies ahead.

We join Harry and his friends for their fifth year, Harry's hardest to date.

With the school still reeling from the death of Cedric Diggory at the end of the Triwizard Tournament and the wizarding world at large thinks that Harry is crazy with his talk of the return of Voldemort. Hermione finds some like minded students and they form a small group aiming to learn real defence against the darks arts as since the ministry is meddling with the school things are going to hell. There is a lot jammed into this movie (even though it still misses parts from the book) with the school takeover, the DA and everything in between.

There's plenty of good special effects, from the mid air wand fight between the Order of the Phoenix and the Deatheaters, to the magic room that shows up only when you need it and with just what you need, Mad Moody's eye and so on, they were well done. The acting is only getting better per movie and so it makes it more believable, Umbridge was annoying and perky but for me she didn't quite hit the right note, so I didn't like her as much as I had hoped that I would.

Another well done movie for the Potter series.