Number Chase: The Game Where You Guess The Number review 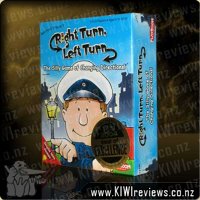 Disclosure StatementFULL DISCLOSURE: A number of units of this product have, at some time, been supplied to KIWIreviews by ThinkToys or their agents for the purposes of unbiased, independent reviews. No fee was accepted by KIWIreviews or the reviewers themselves - these are genuine, unpaid consumer reviews.

Right or Left - which way should you turn? Ask the traffic officers so you can learn.

But be sure to figure out which way they are pointing you. Remember, it depends on that officer's point of view.

All players get the directions at the same time. The winner is the first to call out the right sign!

This was a game I thought was great brain-fodder material... but alas it seems I was in the minority. My eldest son wasn't impressed at all, since he has spatial-awareness issues, and my youngest is too young to understand the concept... which is OK really, as he is well under the minimum recommended player age of 6+ years.

The game is very simple to understand, the problems arise when it comes to reorienting your point of view as your eye hops around the circle of cards. Is the person facing towards you or away from you, and how does that change the "left or right" directions on the instruction card in your hand? Because you never know which order the cards will be placed on the table, you can't predict the results ahead of time. Some arrangements of cards will make the nett result of "3 Left, 2 Right, 3 Left" anything from 8 places to the left/right of the starting card, to as as few as 2 spaces away from your starting point.

Personally, I felt this game was very well designed and developed, and would be great for helping children get to grips with their left/right awareness. Expanding this game (possibly digitally only for now) into 3 dimensions would be a simple matter, and would increase spatial awareness dramatically.

Overall, I was impressed, but the consensus vote went against me on this. None the less, I scored it on how *I* felt about it, as a home-schooling parent.

This was our (or perhaps just my) least favourite of the set of four of these games that we have. Having said that though Miss Five really liked playing this by herself. She hoarded it in her room to play with when she realised I wasn't that interested.

The big problem with this is that there is no clear winner. So you put all the traffic officer cards down in a circle and then turn over one of the pile of direction cards. It will have a symbol at the top which will match the symbol at the top of one of the traffic officers cards. That is the officer that you then start from. Some of the officers are facing you front on, some have their backs to you. There will be three instructions on each card. ie 4 rights, 2 lefts, 3 rights. Then the first to shout out where they have ended up wins. The thing is that you shout it out and then have to talk everyone through how you got to that person then you realise you were wrong and it was another officer so then you start again......

I got bored quite quickly but it is a good card game for learning left and right, so worth while playing with the kids if you wanted to change the rules a bit and just focus on lefts and rights rather than winning.