« Rena's Promise: A Story of Sisters in Auschwitz review 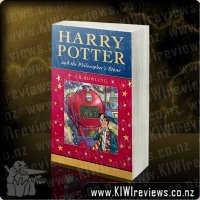 Harry Potter is an ordinary boy who lives in a cupboard under the stairs at his Aunt Petunia and Uncle Vernon's house, which he thinks is normal for someone like him who's parents have been killed in a 'car crash'. He is bullied by them and his fat, spoilt cousin Dudley, and lives a very unremarkable life with only the odd hiccup (like his hair growing back overnight!) to cause him much to think about.

That is until an owl turns up with a letter addressed to Harry and all hell breaks loose! He is literally rescued by a world where nothing is as it seems and magic lessons are the order of the day. Read and find out how Harry discovers his true heritage at Hogwarts School of Wizardry and Witchcraft, the reason behind his parents mysterious death, who is out to kill him, and how he uncovers the most amazing secret of all time, the fabled Philosopher's Stone! All this and muggles too. Now, what are they?

Love, love, love! This was the original movie back in 2001 (I was 6) that my dad took me to see which captured me into the world of Harry Potter. From then on, I wanted to be a witch. I wanted to be apart of the Harry Potter world. My dad would read this novel to me at night before bed every night. And then the next book. And then the next. By which time I could read the novels to him. It was an amazing bonding experience I was able to enjoy with my dad, and one I will never forget.

The Harry Potter books are wonderful and exciting for any child who dreams of fantasy, sci-fi or magical lands. The great thing about this book is that it is written in the style of a young preteen child. The next book is written with slightly more intense ideas and so begins the ageing of Harry Potter, as does the ageing of the child reader. By book 7, Harry Potter is 17 and faces many more dark, twisted, frightening tales. By which time the reader too will have aged and been better suited to understand the intense storyline and grasp the higher thinking morals and themes of the story.

All school-aged children should read or be read too, this book. It is one which will be spoken about for generations to come.

Ok so we have all seen the Harry Potter movie series, and if we have not, we have most definitely heard of Harry Potter. My younger brother purchased these books and when I ran out of books to read one night, I decided to give this a go.

Initially I found the sheer size of the book a bit daunting. I am a fast reader and can get through books fairly quickly, even large novels, but this just seemed huge. As the movies are based on the books I already knew what was going to happen but it was still good to read what inspired the movies in the first place. Plus it's wizards and magic and castles lol

J.K Rowling is truly an amazing writer. I was actually blown away. Sure the movies a pretty amazing, but when you consider that they are only amazing because of what one person was able to create in a book. It really is quite mind blowing. I would imagine it would be hard to write a book about witches and wizards without writing the same as every other author and without getting bored, but Rowling dies something amazing with this story, creating a novel that reads like a suspense-filled mystery. It is no wonder the series went on to be movies.

So i'm a bit slow at jumping on the Hogwarts train - but i have finally started to read this series!! What fantastic writing, Rowling is every child's hero in my opinion!! Her writing style is able to capture imaginations of all ages and i would say any child from around the age of 6 or 7 would enjoy being read these books. Although there are some 'darker' parts but all is well that ends well!

The book is an endless marvel of creativity, the whole idea that an ordinary boy living a rather sad dull ordinary life has this massive transformation into another world, which sits within our own world is incredible. I loved the interactions within characters and the use of pets. Hagrid is one of my favourite characters and his love for Harry is never ending.

I can see the series becoming classics in years, i think that these books are priced right, although you could find second hand ones somewhere - i'm always a big fan of re reading someone else's books! This is a book that will get you hooked and you are sure to lose track of time!

Score: 9.0
Product reviews for listing 2298: The Mirage Makers 2: The Shadow of Tyr -  Written by Glenda Larke

While Demitra struggles to start a rebellion against the Exaltarch, her young son, Arrant, struggles with his own inadequacies. He believes himself rejected by his father, and is alienated from his mother because of her relationship with her one-time slave, Brand. At the same time, he is unable to control his own Magor powers predictably

Arrant′s only companion is his half-brother, Tarran, a member of the Mirage Makers, who has ... more...