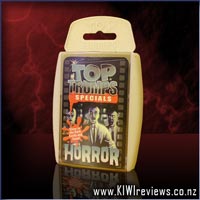 Disclosure StatementFULL DISCLOSURE: A number of units of this product have, at some time, been supplied to KIWIreviews by the company for the purposes of unbiased, independent reviews. No fee was accepted by KIWIreviews or the reviewers themselves - these are genuine, unpaid consumer reviews.
Available:
At quality stationary and game outlets

At last, its here - the all new Top Trumps Horror! 30 of the most grotesque, chilling, fierce and eerie beasts you've ever seen in one pack!

All time favourites like the blood sucking Dracula, the snarling Wolfman and Death himself, the Grim Reaper, confront newer villains like the screaming Banshee, the Witch Doctor and the 3 headed hound of hell, Cerberus, on categories including Guts and Gore, Black Magic, Killer Instinct, Physical Power, Fear Factor & Horror Hall of Fame. Each card glows in the dark, and features incredible illustration, created especially for Top Trumps.

2 or more players can play. Each card has a category file. One player will read out one of their categories, their opponents must openly compare the same category. Whoever has the highest fact wins the opponents cards. The winner willI be the person who ends up with all the cards. It's a must for any fan....don't have nightmares.

How can you not love a deck that glows in the dark! It's just too cool! The kids will love it, and the adults can have all sorts of fun with it too. My son and I had a couple of games of it hiding away in his 'cave'... a few hours with the cards spread out under a spotlight to charge up, then we dove under the desk, dropped the old bedsheets over the top and we were camping out in the cave, with our horror cards.

Overall, lots of fun, and drawing characters from a huge spectrum of mythos, from some famous greeks like the Minotaur and Medusa, through to the more modern Killer Clown and other movie spooks. There's even my favourite character, The Grim Reaper, with his eternal strengths... I thank/blame Terry Pratchett's Discworld stories for that... but my favourite card would have to be the Doppelganger... it is by far the most entertaining card in the deck. I'll leave you to discover why...

I couldn't help but give this pack a perfect score. A whole host of horror baddies made to be played in the dark, accented with glow in the dark paint.

Instead of playing this they way suggested in the pack, each won pair was laid out in the light, when all pairs were on the floor we switched out the lights so we could see the glowing cards, then by candle light, we played again with the glowing cards, and playing this game, with an eight year-old daughter before bedtime ... well, it did add to the atmosphere of the game.
When played normally, one won't really get any of the benefit from the glow in the dark paint, unless the cards are spread out in the light first for a few minutes before playing the game.

I can't say too much more about this game except to say that if my perfect 10 score is anything to go by, your kids will agree with me - this Top Trumps pack is one of the best yet.

They are really fun and when they glow in the dark they look really scary.
The pictures are awesome and a little scary but I wasn't scared by them, but some little kids might be scared by them.

The cards have lots of interesting facts on the bottom.

I think this might be one of my favourites ever. My friends would like them because they are really cool.

Built upon the foundation established by Souls series creator and Dark Souls II Supervisor, Hidetaka Miyazaki, with development helmed by FromSoftware Director Tomohiro Shibuya, Dark Souls II will feature a new hero, a new storyline, and an unfamiliar world for players to survive in, while delivering the uncompromising challenge and ultimate sense ... more...