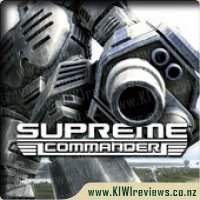 Supreme Commander features a riveting, action-packed storyline, ground-breaking gameplay and genre-defining online multiplayer battles. In the 37th Century, the galaxy is torn apart by three rival factions, each vying to eradicate its enemies from the universe, end the Infinite War and become the reigning power supreme. Supreme Commander represents the next evolution in the Real Time Strategy genre through its truly strategic and tactical gameplay and mind-blowing scale and scope, which is coupled with unrivalled zoom and control features.

Planetary warfare on a GALACTIC scale: Delivering one of the most advanced and innovative features of any RTS game, Supreme Commander establishes a breathtaking new standard for sheer scope and scale of gameplay. Massive battles unfold across maps of unparalleled size and scope and thousands of units fight to the bitter end.

For a millennium war has raged between the United Earth Federation, the Cybran Nation and the Aeon Illuminate. All have strong opposing systems of belief have locked them all into a bitter, merciless conflict that has come to be known as the Infinite War. Now, after centuries of struggle, a war that has torn the galaxy asunder has finally reached a turning point. One has finally risen above the rest and it is the Supreme Commander who can finally put an end to the war.

This game puts you in command of one of three factions -- the United Earth Federation, the Cybran Nation or the Aeon Illuminate â" which you must lead to victory and end the thousand-year Infinite War. A revolutionary Strategic Zoom control allows for immediate viewing and command of entire armies as you battle through either one of the three vast campaigns or against online armies.

Gameplay is great, and if you are a fan of strategic, build-em-up games, then this is one that you would be foolish not to at least try. Graphics etc. mould well, combined with a great gameplay and new abilities, makes for a great game. And with four options, one of the three factions or online gameplay, you've got hours upon hours of play.

The Dark Knight, Batman, his foes and allies fight it out on the streets of Gotham in this Top Trumps pack. Featuring famous Heroes and Villains from the DC Comic universe and the Justice League of America, compare facts like height, intelligence, agility, strength, speed and fighting skills.

With 30 specially commissioned illustrations, exclusive to Top Trumps, you can pitch classic characters like The Flash and Supergirl against ... more...