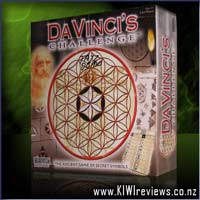 The ancient game of secret symbols is a classic strategy game with hidden mysteries as old as the pyramids! Take turns placing shapes on the board to reveal 9 different patterns. The more complex the design, the more points you score.

May be played by 2 players or 2 teams.

At first glance, the game seems simplistic and tedious, liable to become totally boring very rapidly. With the age-old addage "Never judge a book by it's cover" running through my head I convinced a mate to sit and give me a challenge. We agreed upon a mutual strategy, at least to start with, of no-blocking moves unless there was no other choice. This allowed us to focus more on the game, and less on the attack.

Within 10 moves, we could already see a tough challenge ahead... but not exactly one of making the patterns, but more along the lines of "Now that I have placed this piece, just what patterns exactly can I score on?" It was evident as the game progressed that anyone with a short-term memory disorder should NOT play this game, because spotting the newly completed patterns was easy, but the sheer numbers of patterns that suddenly appeared as complete by placing a single piece, grew almost geometrically, and thus became difficult to keep in mind to score.

By the time an hour had passed, and about 60% of the board was full, we gave up from sheer mental stress of trying to figure out if completing a circle also completed 1 hourglass or two, and if making a carefully crafted 'Charmed' symbol counts as a single triangle worth a mere 1 point, or a trio of eyes, worth 15 points total... it was a great lark, full of much merriment and laughter, but in the end it became a struggle to score.

Overall, I would rate this game quite highly, and would estimate it will be far more popular with the artistic and the thoughtful aspects of society, and will appeal less to those who prefer a more interactive game, such as Cranium. If it's your thing, you'll love it, if not, save your money and go buy Pictionary or something like that.

The Jade Empire has withstood coutless attacks, but the greatest threats come from within. As a master of the martial arts, will you restore this ancient land to it's former glory, or crush it beneath your heel?